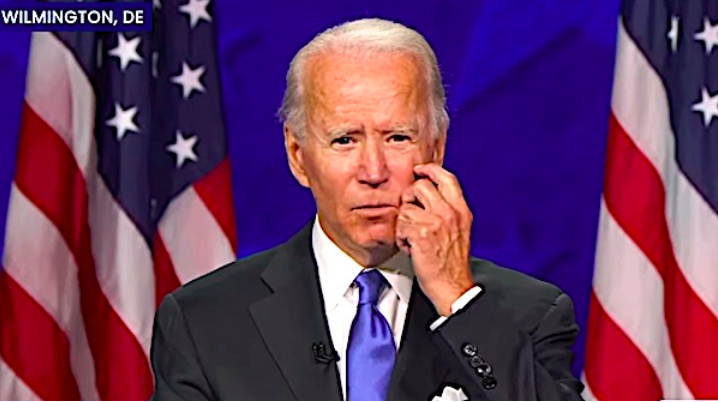 Joe Biden struggled with his words and thoughts on several occasions at a news conference Thursday following a meeting with governors regarding the coronavirus pandemic.

“Thirdly, we discussed the need to help states with Title 32 funding for the National Guard. That’s a fancy way of saying governors … governors … need to be able to get funding when they dispo … when they need to … uh … em … em … uh, bring their National Guard into play, ” he said.

In another instance, he had trouble with the Defense Production Act, which President Trump has used to support the supply chain for the nation’s COVID-19 response.

“I’m going to … we’re going to impose the … we’re going to enforce the … excuse me, employ the defense, reconstruct the act, to be able to go out there and dictate companies build and do following things,” the 78-year-old said.

See video of his remarks:

Biden: "I’m going to — we’re going to impose the — we’re going to enforce the — excuse me, employ the defense, reconstruct the act, to be able to go out there and dictate companies build and do following things." pic.twitter.com/LSNrlwufDG

BizPacReview commented that Biden’s “apparent cognitive decline since leaving the vice presidency has been a frequent topic of conversation throughout his campaign, though Democrats and some in the media have claimed it should not be a topic of discussion.”

Among many other incidents, Biden flubbed an iconic line from the Declaration of Independence, inflated the COVID death toll to 873 times its actual size and mumbled his way through a sentence until admitting, “I don’t know.”

Last spring, Biden gave an unintelligible answer when asked by MSNBC’s Yasmin Vossoughian what he would say to Americans who are “terrified” by the coronavirus outbreak.

“My message is that the president has to move more rapidly. You know, we know from experience that speed matters. We know that you can’t go too fast. It’s about going too slow,” he began. “And in order to avoid that – those very high numbers, we have to do at least several things. One, we have to depend on what the president is going to do right now. And first of all, he has to tell – wait till the cases – before anything happens – look, the whole idea is he’s got to get in place things that were shortages of. We’re not testing enough people. We don’t – our first responders, docs and nurses, don’t have the gloves, the masks. …”

Biden has referred to a nonexistent border between Venezuela and Bolivia, introduced his granddaughter as his dead son, then got her name wrong.

He also called President Trump “George,” failed to member the name of the “senator who was a Mormon, the governor,” and addressed the people of “Arizona” while he was in Nevada.