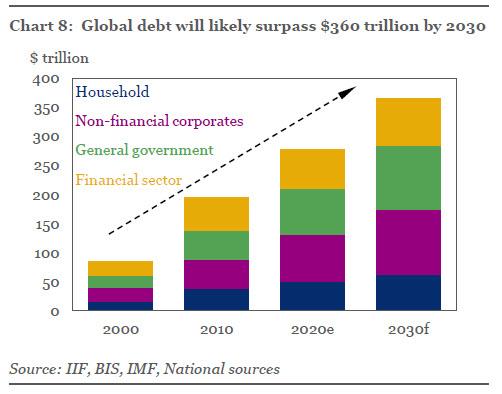 The latest quarterly report from the IIF which among other things, has the unpleasant task of calculating total global debt (which consists of Household, Non-financial corporates, General government and Financial debt), was published today and it’s a whopper because it shows, in no uncertain terms, a world that is careening toward either the spectacular deflationary supernoava of a debt collapse, or a hyperinflationary explosion that will need to sweep away hundreds of trillions in debt in the next few years.

Here are the findings:

And things get really batshit insane after that, but more on that in a moment.

According to IIF calculations, global debt is on track to exceed $277 trillion in 2020: Spurred by a sharp rise in government and corporate borrowing as the COVID-19 pandemic wears on, the global debt load increased by $15 trillion in the first three quarters of 2020 and now stands above $272 trillion. Much if not all of that increase was monetized by central banks who have now activated the disaster contingency plan known as helicopter money. And with little sign of a slowdown in debt issuance, the IIF estimate that global debt will smash through records to hit $277 trillion by the end of the year.

Debt-to-GDP ratios has gone parabolic: Following a record surge in global debt-to-GDP (from 320% to around 362% in H1 2020), the IIF is proud to report that the rise in Q3 2020 was “more modest”, at less than 2 percentage points—helped by the strong global recovery. And while the IIF expects that the global debt-to-GDP ratio will reach some 365% of GDP in 2020, should lockdowns accelerated in the coming weeks, we expect a double-dip depression which may push total debt/GDP above 400% in the next two quarters.

The silver lining, inasmuch as one exists, is that Emerging market debt “only” soared to 250% of GDP: EM debt rose from 222% of GDP in Q4 2019 to over 248% of GDP in Q3 2020. The dollar amount of EM debt now surpasses $76 trillion, with the rise was driven by a surge in non-financial corporate debt in China. Excluding China, the USD value of EM debt declined from $31 trillion in Q4 2019 to $29.3 trillion in Q3 2020, largely reflecting losses in EM currencies against the USD. Of course, excluding China is impossible in a world where China will soon be the dominant superpower.

At the same time, Debt outside the financial sector hit $206 trillion in Q3 2020, up from $194 trillion in 2019. Governments accounted for 60% of the $12 trillion buildup in the world’s debt pile (ex-financials). Global non-financial corporate debt rose by over $4.3 trillion to a fresh high of near $80 trillion, while household debt rose by $500 billion, to near $50 trillion.

The catastrophic breakdown is shown in the table below:

An in-depth look at the “usual suspects” reveals no surprises: the US, Canada and Japan have seen the biggest increases in non-financial sector debt this year, with the rise in debt-to-GDP ratios varying from 45 percentage points in the U.S. to over 75 percentage points in Canada. Across mature markets, government debt has again been the main driver of the rise, increasing the most in Canada, Japan, the U.S., the UK and Spain. Of note, Ireland is the only country in the IIF sample to see a decline in the total debt ratio, as declines in household and non-financial corporate debt offset the rise in government debt. One wonders why they even bother: at this point it’s far too late to be “fiscally prudent” so may as well issue as much debt as the market will take and enjoy the next few years before it all falls apart.

Within EMs, China, Malaysia, Turkey and Lebanon have seen the biggest increases in non-financial sector debt ratios since 2019.

While sharp economic contractions drove surging debt ratios in many cases (notably in Lebanon), the USD value of debt also rose sharply in China, Egypt, Saudi Arabia, the Philippines, and Turkey over the first three quarters of 2020.

Here the IIF points out a massive problem: whereas in the past, emerging markets served as a global debt repository thanks to their low leverage, tising debt service burdens have now become a key issue for emerging markets: Largely reflecting the massive monetary policy response to the pandemic, corporate borrowers have been able to lock in lower funding costs at longer-than-average maturities. With short-term debt securities accounting for over 45% of total issuance in mature markets…

…  lower policy rates have also slashed borrowing costs for governments—a big benefit given widespread COVID-related revenue losses. In emerging markets, however, these revenue losses have made debt service burden much more onerous—despite the benefit from lower borrowing costs. Indeed, unlike DMs where interest expense miraculously declines the more deb there is, in EMs that’s not the case, and we are approaching the Minsky Moment collapse very, very fast.

Finally, the IIF estimates that some $7 trillion of EM debt will come due through end-2021, with USD-denominated debt representing 15% of the total.

Putting it all together, reveals nothing short of an surreal, apocalyptic hellscape where the world either collapses into a debt singularity as global debt to GDP slowly but surely creeps toward 1,000%… or explodes in a hyperinflationary supernova as central banks deposit trillions in digital Fedbux to every citizen instructing them to buy anything and everything they can find, in a last ditch effort to hyperinflate away the debt.

But don’t take our word for it: as the IIF itself states, “the pace of global debt accumulation has been unprecedented since 2016, increasing by over $52 trillion. While some $15 trillion of this surge has been recorded in 2020 amid the COVID-19 pandemic, the debt build-up over the past four years has far outstripped the $6 trillion rise over the previous four years and over earlier comparable periods.”

As a result, even the IIF admits that “there is significant uncertainty about how the global economy can deleverage in the future without significant adverse implications for economic activity.”

One alternative – the one which is coming thanks to the digital dollars (and euros, and yen, and yuan) which the Fed and its peers will wire to every citizen – is that the next decade could bring a reflationary fiscal response, in sharp contrast to the austerity bias in the 2010s, according to the IIF. Of course, it would also unleash a monetary tsunami that will in just a few years do away with fiat as we know it… but that’s precisely why we have been pounding the table that the biggest story of 2020 is not covid, not the election, but the “all hands on deck” preparation by central banks to launch digital currencies. We have about 2-3 years before digital currencies are fully adopted.

Whether it is a deflationary neutron bomb, or a hyperinflationary supernove, the IIF’s conclusion is quite clear: “if the global debt pile continues to grow at the average pace of the last 15 years, our back-of-the-envelope estimates suggest that global debt could exceed $360 trillion by 2030—over $85 trillion higher than current levels.”

That, whether it’s in an inflationary or deflationary context, is best known by two very familiar words: “game over.”