The Dons Behind Biden 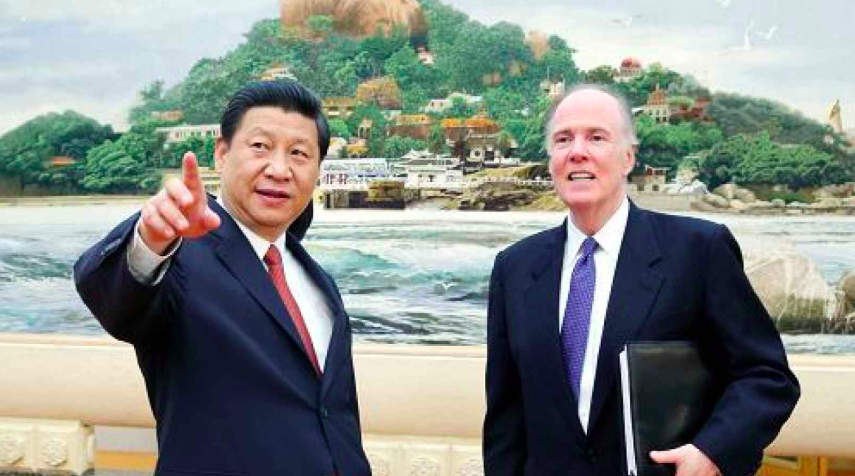 Why Biden thinks the Chinese Communists are “not bad folks” and “not competition for us.”

“Biden Gets China,” headlined the January 2, 2012 report in The Atlantic. As author Steve Clemons explained, “Vice President Joe Biden will take the lead on the administrations next phase China policy.”  This marked a shift to a “strategy of engagement with Biden at the top,” that allows the US to deal with China’s likely next president from a Vice President to a Vice President/Next President status — and to continue both the Departments of State’s and Treasury’s ongoing engagement with other designated key Chinese leaders.”

As Clemons explained, the move to put Biden at the top was “orchestrated” by Thomas Donilon, once described by James Mann in Foreign Policy as “Obama’s Gray Man” and seldom mentioned in the press. So Americans have cause to wonder what, exactly, Thomas Donilon is about.

According to AllGov.com, Donilon worked in the Carter White House and four years later served as campaign coordinator for Walter Mondale. In 1985, the University of Virginia law grad served with the Democratic National Committee and the next year joined the staff of the Senate Judiciary Committee but “he remained interested in helping get Democrats elected to the White House.”

In 1988, “Donilon first advised Sen. Joseph Biden” then went on to serve as senior counsel on President Bill Clinton’s 1992 transition team, and chief of staff for secretary of state Warren Christopher. Donilon became assistant secretary of state for public affairs and participated in the expansion of NATO and the relationship between the U.S. and China. His background showed no scholarly work on that country or any other.

From 1995 to 2005, Thomas Donilon was chief lobbyist of the Federal National Mortgage Association, better known as Fannie Mae. As CNN reported, Donilon left the company before it imploded and “was forced to pay $400 million to the federal government for misstated earnings during his time there.” Donilon also attempted to interfere with an audit by the Office of Federal Housing Enterprise Oversight and tried to launch a separate investigation into the OFHEO itself.

In 2010, the president tapped Tom Donilon for National Security Advisor, which troubled Robert Scheer of The Nation. “Why in the world would President Obama, whose legacy has been sabotaged by a housing crisis that Donilon helped create and conceal, have hired him to run the most sensitive position of public trust in his administration?” Donilon was a skilled political player, Scheer wrote, but as the president so often demonstrated, “it’s the top hustlers of whom he seems enamored.” In similar style, Robert Gates predicted that Donilon would be a “disaster” as national security advisor.

In Duty: Memoirs of a Secretary of State at War, Gates wrote that Donilon characterized the United States military as “in revolt” and “insubordinate.” Donilon, who had never been in the military, “bridled” when Gen. McChrystal announced a “counterinsurgency” strategy in Afghanistan. Here Donilon was only advancing official administration policy. As Gates explained, “troops risking their lives need to be told that their goal is to ‘defeat’ those trying to kill them. But such terms were viewed in the White House as borderline insubordinate political statements by generals.”

According to James Mann, Donilon amassed “enormous internal control” over American foreign policy, Even so, “few news outlets have profiled Donilon, who generally prefers to operate behind closed doors.”

In a June, 2013, speech to the Asia Society, Donilon said, “I disagree with the premise put forward by some historians and theorists that a rising power and an established power are somehow destined for conflict.” No clarification that the “rising power” is a Communist dictatorship and one of the most murderous regimes in history, and the “established power” a constitutional democracy. As Donilon saw it, “a deeper U.S.-China military-to-military dialogue is central to addressing many of the sources of insecurity and potential competition between us.”  (emphasis added)

So the “disaster” Thomas Donilon, who first advised Sen. Biden in 1988, is the likely source for Joe Biden’s claim that the Chinese Communists are “not bad folks, folks” and “not competition for us.” This is the Fannie Mae hustler who “orchestrated” Joe Biden as the point man for China policy. On Biden’s watch, China ramped up internal repressions and became more aggressive, modernizing their military and creating island bases that put key American allies and interests at risk.

In November, CNN reported that Tom Donilon was a “leading contender” for director of the CIA, a post he has reportedly turned down. Still, the Donilon family influence runs strong.

Tom Donilon’s wife Cathy Russell was deputy assistant to the president and chief of staff for Second Lady Dr. Jill Biden. She then became U.S. Ambassador for Global Women’s Issues at the Department of State. As Bloomberg reports, Donilon’s wife served on Biden’s transition advisory board and will be director of the White House Office of Presidential Personnel. Tom’s younger brother Mike is also a player.

During the 2020 campaign, Mike Donilon served as Biden’s chief strategist, and as the New York Times reports, Biden has now made Mike Donilon a senior advisor, “the defender of the Biden brand.” Meanwhile, back in 2012, brother Tom Donilon helped out by “orchestrating” Joe Biden’s takeover of  China policy. As the New York Post reported, through son Hunter, the “Big Guy” got a piece of the action.

“Biden Gets China,” has now become “China Gets Biden,” right where they want him. As President Trump says, we’ll have to see what happens.