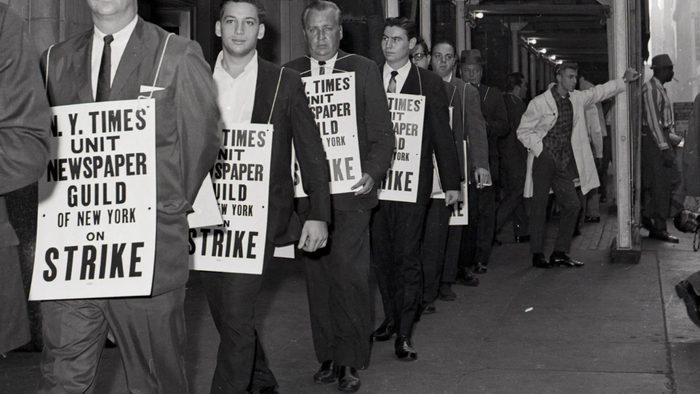 More than one thousand New York Times employees could walk off the job late next week if a newsroom union fails to strike a deal with the publisher.

After 20 months of negotiations, enough is enough: Today, more than 1,000 @NYTimesGuild members pledged to walk out if @nytimes does not agree to a complete and fair contract by Dec. 8.

In a series of tweets, NYTimesGuild, the labor union of more than 1,000 NYTimes employees, complained about pensions, health care, and pay while the progressive newspaper is on track for an annual operating profit of $320 million and splurged $150 million on stock buybacks.

If you can believe it, NYTimes still pays their base journalist a measly $65,000 yearly, barely enough to live in NYC.

A company on track for an annual operating profit of $320 million or more should be paying its employees a minimum of $65,000 a year. The @nytimes thinks this is unreasonable. The @NYTimesGuild does not.

This walkout pledge was not a decision we made lightly. But the truth is @nytimes is a blank page without @NYTGuild members. It’s time they gave us a contract that reflects our true worth. pic.twitter.com/MTMdockEKK

The lack of pay increases and failed negotiations by the union to solidify a deal appears to have been the last straw:

“Enough. If there is no contract by Dec. 8, we are walking out,” read the email’s subject line containing the letter that was sent to NYTimes publisher A.G. Sulzberger and CEO Meredith Kopit Levien on Friday, according to New York magazine.

The labor union wants negotiations on health care, pension plans, and a pay increase. They threatened to stop working for a full day next Thursday if an agreement wasn’t reached.

“Labor unrest at the Times is always awkward for the top editor, who gets pinioned between the newsroom they run and the business side to which they must answer. The big walkout would be the first real crisis for new executive editor Joe Kahn,” New York Magazine wrote.

“While we are disappointed that the NewsGuild is threatening to strike, we are prepared to ensure The Times continues to serve our readers without disruption. We remain committed to working with the NYT NewsGuild to reach a contract that we can all be proud of.”

Meanwhile, “the paper,” NYTimes television critic James Poniewozik said, “doesn’t write itself.” A labor action and what could result in content disruption wouldn’t necessarily be a terrible thing, as it would force readers to search for news elsewhere.