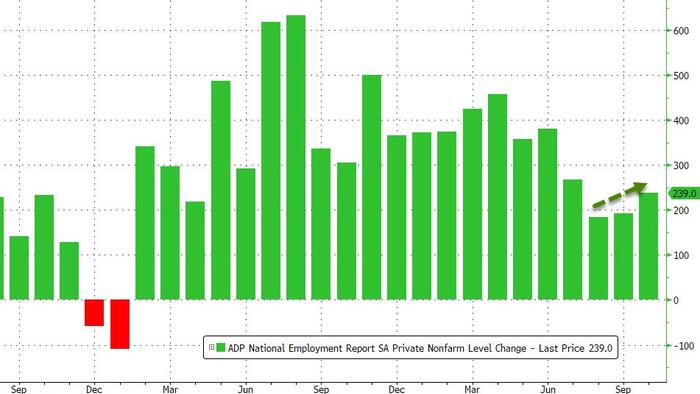 Following the weakness in this week’s US manufacturing surveys’ employment sub-indices, analysts expected this morning’s ADP Employment data to show a slowdown in job gains in October. However, like JOLTS, the ADP data showed an improvement in the labor market with 239k jobs added in October (vs 192k added in September) and better than the 185k addition expected.

Under the hood, things are notably less optimistic with goods-producing jobs tumbling 8,000 (with manufacturing down 20k), while Service-providing jobs rose 247,000 – all driven by gains in Leisure/Hospitality…

That is the 3rd straight month of declines for the goods-producing sector.

So waiters and bartenders saved the day again? Some have suggested this shift indicates people getting second/third jobs.

Small- and medium-sized businesses hired the most workers…

“This is a really strong number given the maturity of the economic recovery, but the hiring was not broad-based. Goods producers, which are sensitive to interest rates, are pulling back, and job changers are commanding smaller pay gains. While we’re seeing early signs of Fed-driven demand destruction, it’s affecting only certain sectors of the labor market.”