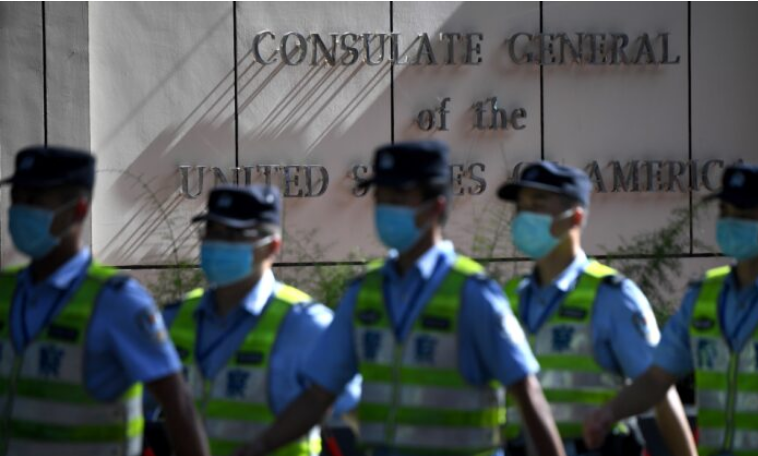 Chinese authorities see U.S. consulates as “hostile forces” that conduct “infiltration and sabotage” activities on Chinese soil and have ordered officials to monitor key U.S. diplomats, according to a leaked document obtained by The Epoch Times.

At a time when bilateral relations hit a historical low, the document from Leizhou city of China’s southeastern Guangdong Province offers a rare glimpse into how the Chinese regime deals with American diplomats.

In a four-page “work plan” dated April 2018, the Leizhou Foreign and Overseas Chinese Affairs Bureau described the “U.S. and other Western consulates in China” as key targets that could threaten the region’s political and social stability.

All departments and units within the bureau must work to counter such influences, by effectively “blocking [the consulates] from establishing connections with key [Chinese] political figures, prominent lawyers, ‘public intellectuals,’ ‘rights defenders,’ and special interest groups,” the bureau told its staff.

The bureau’s goal is to “break all threats and nets” and leave no room for such attempts, the document stated.

To address the perceived threats, the bureau outlined a four-step plan, with measures such as watching for “infiltration activities” organized by foreign consulates in Guangzhou city, the capital of Guangdong, and “use all efforts”—including “reminders, warnings, and a mild degree of force”—to discourage the aforementioned individuals from attending events held by consulates.

The bureau staff were to monitor organizations and individuals that have “close ties” with the foreign consulates, and gather any relevant information, such as their background and any changes in their “asset accounts,” to cut off any “financial enticements” from U.S. consulates. 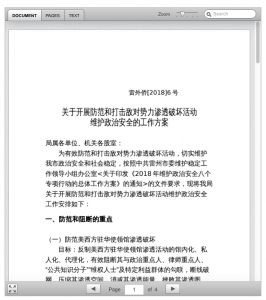 The office also planned to establish a database on “key” foreign diplomats in China and use big data to track down their whereabouts. “It’s a countermeasure against ongoing infiltration and subversion,” the document stated.

The bureau cautioned the staff to be “strategic” in balancing between “prevention and control” and “collaboration and taking advantage.”

Given that Guangdong borders Hong Kong, the bureau also detailed in a separate section how staff should guard against any “contamination” from “opposition forces.” The “pro-independence elements” may attempt to “sneak in” through participating in cultural exchange programs and inviting Chinese scholars to Hong Kong and convert them into “domestic agents,” it warned.

A former British colony, Hong Kong returned to Chinese rule in 1997 and was promised a high degree of autonomy, which the regime stripped away this July with a sweeping national security law. The Chinese Communist Party routinely characterizes Hong Kong pro-democracy activists who are vocal about Beijing’s encroachment on the city’s affairs as separatists, and accuse them of supporting the territory’s independence from the mainland.

It stressed that in the event such opposition forces “really need to enter” Guangdong, they must be strictly monitored and prosecuted if they exhibit any problematic behaviors. The document also stated plans to collaborate with relevant higher government departments in Hong Kong, such as by supplying intelligence, to eliminate any of Hong Kong’s “negative influences” on Guangdong.

The document ended by stating the “counter-infiltration” work would be on the daily agenda. The bureau formed a “leadership team” comprising top officials, including the bureau director, to take up this task.

The U.S. State Department did not immediately return an inquiry regarding the leaked document.

While the document focused primarily on Guangdong, it is unclear whether other Chinese cities have issued similar orders.

A separate internal document from 2016 suggested that Chinese authorities have oversight over how local academic institutions can interact with U.S. diplomats.

In an August 2016 meeting with top officials in northeastern Jilin province, then-U.S. ambassador to China Max Baucus raised concerns about consular access to multiple Chinese universities, citing abrupt cancelations of scheduled conferences with U.S. consular officials in the nearby city of Shenyang, according to a government meeting minutes provided to The Epoch Times.

Wang Zhiwei, then-director of the Jilin foreign affairs office, blamed the timing of the conference, saying that students were all on summer vacation and thus, wouldn’t be able to attend; then-Jilin governor Jiang Chaoliang, in turn, replied that any activities that “don’t endanger China’s national security” and “spread positive energy should be fine.”

“I want to clarify that there shouldn’t be any issue with our university visits. There are no subversion activities,” Baucus had told Jiang during the meeting. ” He then asked Jiang to “urge the institutions not to reject interacting with us. 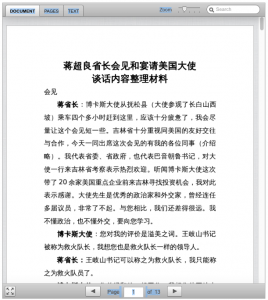 The United States has decried a lack of reciprocity when it comes to diplomatic interactions with the Chinese regime.

“The People’s Daily’s response once again exposes the Chinese Communist Party’s fear of free speech and serious intellectual debate–as well as Beijing’s hypocrisy when it complains about lack of fair and reciprocal treatment in other countries,” he said in a statement.

The two countries have imposed restrictions on each other’s diplomatic missions since July, after the State Department moved to shut down the Chinese consulate in Houston over espionage concerns. In retaliation, Beijing closed the U.S. consulate in Chengdu, capital of Sichuan Province.

On Sept. 2, Pompeo announced that senior Chinese diplomats in the United States will have to ask permission to visit U.S. college campuses and meet with local officials.

“We’re simply demanding reciprocity. Access for our diplomats in China should be reflective of the access that Chinese diplomats in the United States have,” he told a news briefing on Sept. 2.

The Chinese foreign ministry responded by applying restrictions on the U.S. Embassy in Beijing and consulates across China, including the one in Hong Kong.

He Jian contributed to this report.