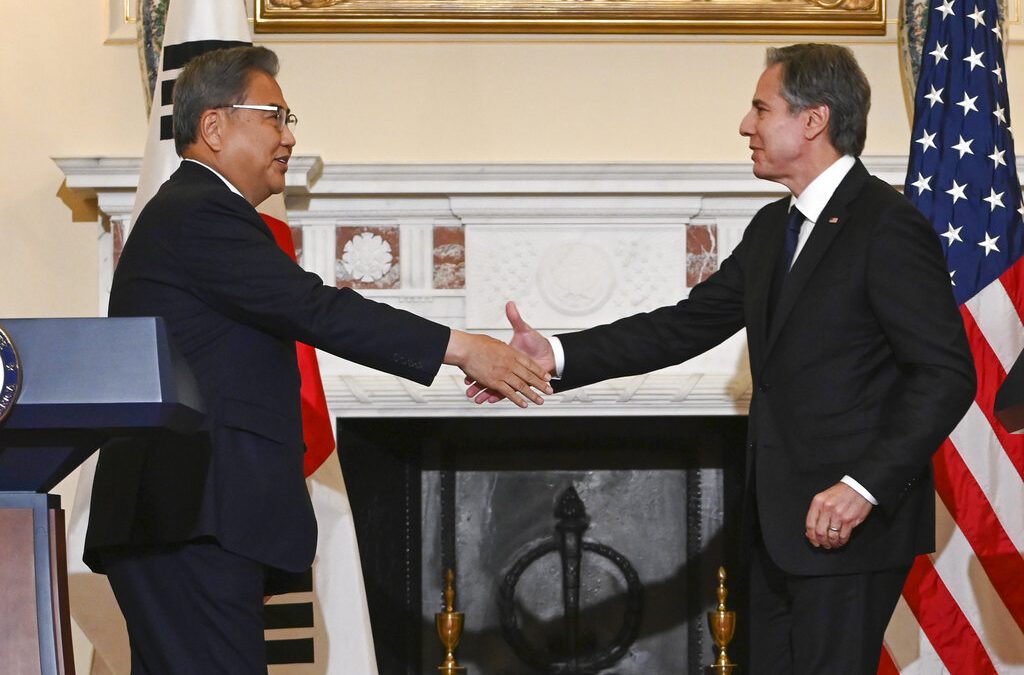 The US-South Korea and North Korea relations have been strained since Joe Biden took over the presidency. Biden has continued to order joint military drills between America and South Korea’s military. This has garnered threats from Kim Jong-un’s regime who have equated those exercises to declarations of war.

Last week, Kim called to bolster the country’s military while claiming the international sphere is a “aggravating environment.” The rouge state has launched dozens of ballistic missile tests so far this year and US Intelligence officials warned another test of a nuclear weapon is on the horizon.

Secretary Blinken stressed, if North Korea wants to be taken seriously by international leaders then it will have to gain favor through diplomacy.

“A nuclear test would be dangerous, it would be deeply destabilizing to the region,” stated the US official. “It would blatantly violate international law as set out in multiple United Nations Security Council resolutions, so we urge the DPRK to refrain from further destabilizing activity. We call on the DPRK to engage in serious and sustained diplomacy.”

America’s top diplomat went on to say North Koreans could be negatively affected if its government continues its path toward instability.

“We want to support the people of North Korea, including with COVID-19 vaccines,” Blinken noted. “Indeed, we have offered our help consistently throughout the pandemic and again during the awful surge that they are now enduring, which comes on top of severe economic and humanitarian crises. Our goal, simply put, is a peaceful and stable region and world. Until the regime in Pyongyang changes course, we will continue to keep the pressure on.”

Meanwhile, State Department Deputy Secretary Wendy Sherman was sent to Vietnam to cement ties with Hanoi. Sherman touted the US has pledged nearly 20 million to help clean up any unexploded ordinances left over from the Vietnam war. Additionally, she promised to work with Vietnamese officials to combat illegal wildlife trafficking.

Both countries seem to agree that they are integral partners and can be a strong influence for the Association of Southeast Asians Nations (ASEAN).

“We agree with you our partnership is critical to ensure an independent and prosperous Vietnam,” said Sherman. “We have great respect for each other’s systems and our joint efforts are to build a better future for our people.”

I had a productive meeting with @FMBuiThanhSon today in Hanoi. We discussed ways we can elevate the U.S.-Vietnam Comprehensive Partnership and support @ASEAN centrality. pic.twitter.com/aTvvzpWOF4

These discussions were met with the wrath of the Chinese Communist Party who has taken aim at the Biden administration for trying to turn leaders in the region against them. Chinese officials claim that along with engaging in diplomatic relations with Asian officials, the US is also making allegations that China wants to subjugate Taiwanese residents.

“The US’ remarks vilifying China will not fool the international community, but only compromise its own credibility,” stated Chinese Foreign Ministry spokesperson, Wang Wenbin. “We urge the US to match its words with deeds, follow through on its commitment not to seeking confrontation or conflict, not to seeking ‘a new Cold War’ or ‘an Asian version of NATO’ or forming antagonistic blocs in the region.”

The latest developments in the Biden-Asia relations landscape seems to show the Biden administration can follow it’s promise to bolster the region at the expense of the CCP.