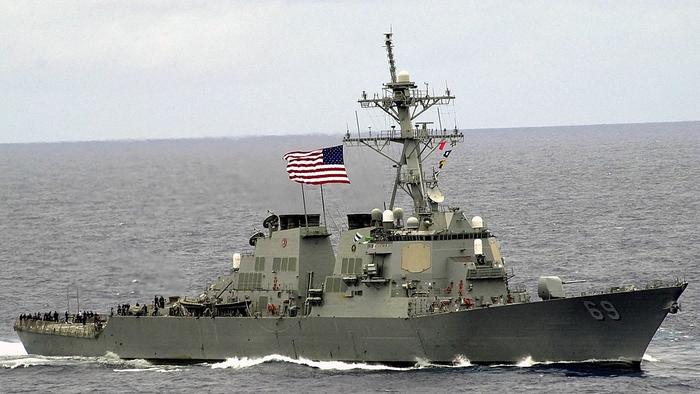 China has blasted the latest US warship sail-through of the contested Taiwan Strait, which happened Tuesday, calling it an intentional “provocation” after a US Navy statement asserted “The United States military flies, sails, and operates anywhere international law allows.”

The Navy’s Seventh Fleet had identified that the guided-missile destroyer USS Milius conducted the “routine” transit as part of the US “commitment to a free and open Indo-Pacific”. This year the White House appears to have ordered such pass throughs of the strait on a monthly basis, given Tuesday’s event marked the 11th US warship transit of the Taiwan Strait this year, which is just under the record – in 2020 there were a total of 13.

Chinese Foreign Ministry spokesman Zhao Lijian subsequently said, “The Chinese side was closely following and fully aware of the US military vessel’s passage through the Taiwan Strait.” He disputed the standard Pentagon description of maintaining freedom and openness of international navigation.

“The US warships have repeatedly flexed muscles, made provocations, and stirred up trouble in the Taiwan Strait in the name of ‘freedom of navigation.’ This is by no means commitment to freedom and openness, but rather a deliberate disruption and sabotage of regional peace and stability,” Zhao said.

“China is firmly resolved in upholding national sovereignty and territorial integrity,” Zhao continued. “The US side should immediately correct its mistakes, stop making provocations, challenging the bottom line and playing with fire, and play a more constructive role in regional peace and stability.”

Additionally the Chinese military’s Eastern Theater Command had revealed later on Tuesday that it had sent PLA naval and air forces to “conduct close-in tracking and monitoring” of the warship.

During the past decade, the US Naval presence in the strait has steadily grown…

US-China tensions have only continued despite last week’s virtual meeting between Chinese leader Xi Jinping and President Biden wherein Biden reaffirmed his commitment to the ‘one China’ policy as Xi reportedly laid out that Beijing sees Washington support to Taiwan – including weapons transfers – as “playing with fire”. State media reported Xi during the Nov.15 virtual meeting: “Such moves are extremely dangerous, just like playing with fire. Whoever plays with fire will get burnt.”

Biden had said according to the White House summery of the virtual summit that his administration “strongly opposes unilateral efforts to change the status quo or undermine peace and stability across the Taiwan Strait”.