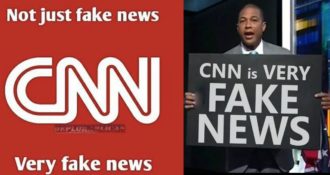 Once again, we find ourselves dumbfounded by the left’s unbearable ignorance, as CNN pathetically attempts, yet again, to paint the President as a bigot.

Of the democratic schemes to delegitimize President Donald Trump, their incessant insistence that the President is a supreme racist may be their most prevalent.  We’ve heard countless tales of hatred and bigotry surrounding our Commander in Chief in recent months, all stemming from the propaganda echo chambers of the liberal left and their mainstream media lap dogs.

It’s a war of perception that the left is fighting, unconcerned about reality and the journalistic integrity that comes with it.  Instead, the left continues to pile on negative headlines, taglines, and conspiracy theories in hopes of drowning The Donald in the very swamp that he has vowed to drain.

The latest liberal lambasting of the President’s character has come, unsurprisingly, from CNN.  Their latest argument regarding Trump’s supposed hate-agenda is nearly too absurd for words.

“’But there is a political move here to highlight … people who aren’t white, I think minorities, and to feed part of this really white nationalist, political support of Donald Trump,’ she said. ‘And if this overstates, I think, what the real problem is, we have violent crimes and criminal gangs here in the United States as well full of white people … This really wasn’t a law and order speech in that sense. This … really had a political undertone.’

“Legacy media reporters like the Washington Post’s Philip Bump bobbed their heads up and down in approval.

“When Bump said that Trump’s rally was ‘intended to tie immigrants to crime,’ Hoover agreed.”

Sadly, the opposition to the President’s crackdown will likely cost many innocent lives, as democrats continue to choose social justice over the law of the land.

As with many of the President’s proposed policies, there is nothing more to this choice than simply enforcing the laws that already exist in America; laws that have been debated, installed, and debated again over the decades.  This opposition by the leftists of the nation is nothing more than a feeble piece of the so-called “resistance” movement that threatens to divide the nation irreparably.