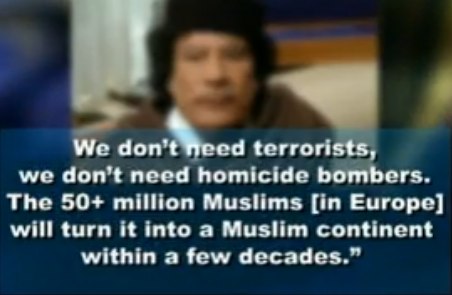 Before Barack Hussein Obama came to power, Libyan leader Moammar Gaddafi was aggressively blocking the tidal wave of mostly Muslim illegal aliens heading for Europe from sub-Saharan Africa and repatriating them back to Africa.

TCN  When Barack Obama started bombing Libya and arming Al-Qaeda backed ,ihadists, Gaddafi said “if I go down, Europe goes black.”Now, without Gaddafi fighting to stop of the flow of illegals, the greatest tidal wave of illegal aliens of all time is at Europe’s door. Obama’s actions in Egypt and Syria have also crippled border enforcement in other places, sending illegal aliens streaming into Israel, Bulgaria, and Greece.

It is being called a “biblical exodus” and is directly related to the toppling of Gaddafi. Barack Obama and Hillary Clinton are directly involved in creating this situation. Libya is still stopping some illegal immigrants, but just a tiny fraction of what was stopped under Gaddafi.

Think Africa Press  According to one news report, “A spokesman for Gaddafi suggested that increased illegal immigration was the price European nations would pay for their military and political support of the rebels trying to topple Libya’s strongman.”

Europe’s reliance on Libyan complicity in holding back asylum seekers became particularly clear in the final days of Gaddafi’s regime when the threatened dictator warned that if he was deposed, “thousands of people from Libya will invade Europe and there will be no one to stop them.” In fact, Gaddafi made good on his promise when, in May 2011, Libyan authorities reportedly began putting non-Libyan citizens on boats and sending them north to Europe.

From Italy to Spain to the UK and the rest of the EU, the ever-rising flood of mainly young male illegal aliens from Africa is proving Gaddafi’s prediction to be spot on.