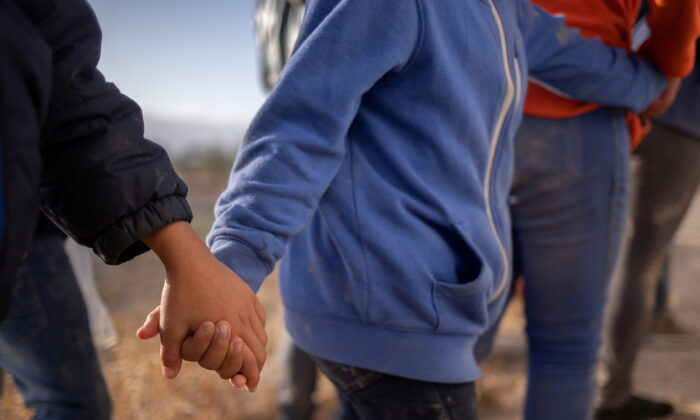 Unaccompanied minors hold hands as they await transport after crossing the Rio Grande river into the United States from Mexico on a raft in Penitas, Texas, on March 12, 2021. (Adrees Latif/Reuters)
By Rita Li

A group of Republicans is seeking information from the Department of Health and Human Services (HHS) over allegations that the department “knowingly” places some unaccompanied illegal immigrant minors in the hands of criminals, according to a letter released on Tuesday.

“We write concerning an alarming report by a federal employee whistleblower that the [HHS] is knowingly transferring unaccompanied migrant children in the custody of criminals, including sex traffickers,” five GOP lawmakers wrote in a Dec. 5 joint letter to HHS Secretary Xavier Becerra. The group cited testimony that the government failed to settle minors, who were caught while crossing the U.S. borders, into homes of “safe, non-criminal sponsors.”

“If these claims are true, this is pure evil being committed by your agency,” they wrote.

HHS officially acknowledges that unaccompanied border crossers under the age of 18 are “especially vulnerable” to human trafficking, exploitation, and abuse, but states that the “majority” are looked after by state-licensed providers operating under cooperative agreements and contract to deliver high-quality care.

The letter comes after non-profit investigative journalism watchdog Project Veritas spoke with Tara Lee Rodas, who formerly assisted the HHS with the processing of unaccompanied immigrant children at an Emergency Intake Site in Pomona, California, as an employee of the Council of the Inspectors General on Integrity and Efficiency (CIGIE). She told the outlet that she believes the current child sponsorship program funded by the department’s Office of Refugee Resettlement is precarious for these minors.

“The tax dollars of people who are listening are paying to put children in the hands of criminals,” Rodas said of what she has witnessed. “[Most people] have no idea that children are going to unrelated people. That children are definitely—we have proof, evidence—that they are being recruited and transported. They are then in debt bondage.”

A Veritas journalist found one illegal immigrant female minor who corroborated Rodas’s concerns at an address Rodas provided. The minor told the journalist that her sponsor, who claims to be her aunt, had forced her into situations of sexual abuse: “She was pimping me and I didn’t like that. She would pimp me to men.”

The Epoch Times has been unable to independently verify the claims.

Rodas said she has expressed her concerns to department officials. However, this usually led to dismissals of her concerns and sometimes retaliation at work.

“[The Biden administration] relaxed a lot of the stringent vetting by creating these additional field guidances, and there’s a focus on ‘move the children’ as opposed to ‘place children in safe homes.’ Right now, it is speed over safety,” she added.

Now, leading four of his fellow GOP lawmakers, Sen. Ron Johnson (R-Wisc.), a member of the Senate Homeland Security and Governmental Affairs Committee (HSGAC), is demanding that Becerra release information regarding Rodas’s complaint on how the HHS vets sponsors of unaccompanied children who cross borders alone.

“This cannot be swept under the rug,” the senators said in the letter.

“We have long known that the Biden Administration’s open border policies are fueling human trafficking and child sex trafficking, as migrants repay debts to the cartels who transport them to illegally cross the border. We have repeatedly pressed HHS and the Department of Homeland Security for information on what the federal government is doing to ensure we are not facilitating the cartels’ trafficking operations. It is infuriating that, according to Ms. Rodas, HHS is doing nothing to protect these vulnerable individuals and shows indifference in its knowledge that it hands children over to criminals for exploitation,” the senators wrote.

Johnson, Scott, and Hawley penned another letter the same day to HSGAC Chairman Gary Peters (D-Mich.), calling on the Senate committee to run a hearing into the allegations that Rodas has raised.