Vaccinated dying at twice rate of unvaccinated in U.K. 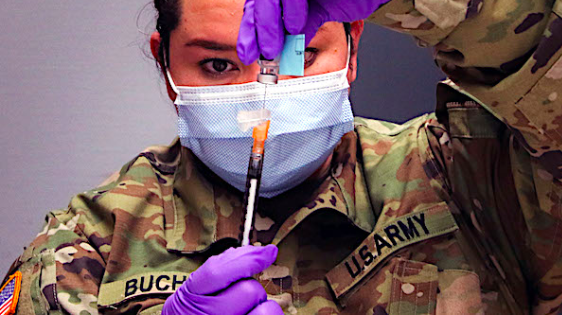 Vaccinated people under age 60 are dying from all causes at twice the rate of the unvaccinated in the United Kingdom, according to data compiled by the British government.

“I don’t know how to explain this other than vaccine-caused mortality,” wrote former New York Times reporter Alex Berenson on his Substack page.

Berenson, the author of a series of books on government response to the pandemic, noted the most recent rate of death per 100,000 people for the unvaccinated in Britain is 0.9% while the rate for the vaccinated is 2.2%.

Recent data in several countries show the rate of infection and transmission among COVID-19 vaccinated individuals is increasing, noted Günter Kampf, a professor of medicine at the University of Greifswald in Germany, in the medical journal The Lancet Regional Health – Europe.

He recalled that high COVID-19 vaccination rates “were expected to reduce transmission of SARS-CoV-2 in populations by reducing the number of possible sources for transmission and thereby to reduce the burden of COVID-19 disease.” 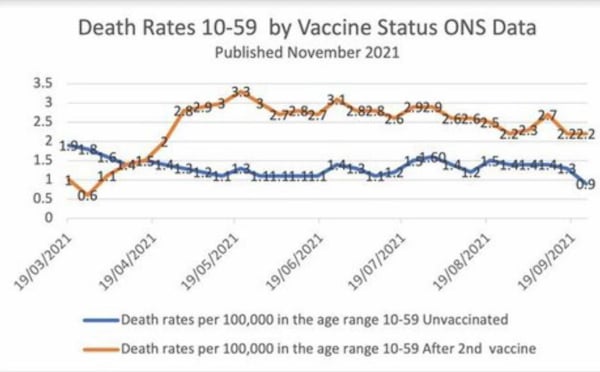 Chart of U.K. weekly data shows the death rate of the vaccinated is higher than the rate of the unvaccinated for those under age 60 (Source: Alex Berenson)

In his home country of Germany, the rate of symptomatic COVID-19 cases among the fully vaccinated has been reported weekly since July 21. Initially the rate of “breakthrough” cases was 16.9% among patients of 60 years and older.

But by Oct. 27, it had reached 58.9%, Kampf wrote, “providing clear evidence of the increasing relevance of the fully vaccinated as a possible source of transmission.”

Similarly, in the U.K., which also has kept weekly figures, at one point recently the COVID-19 case rate per 100,000 was higher among the vaccinated than the unvaccinated in all age groups of 30 years or more.

The professor also pointed to a recent long-term study in the U.K. that found the rate of transmission in households that were fully vaccinated was statistically the same as unvaccinated households. It found a rate of 23% among the unvaccinated compared to 25% among the vaccinated.

Finally, the German medical researcher pointed out that the U.S. Centers for Disease Control identifies four of the top five U.S. counties with the highest percentage of the population fully vaccinated (99.9–84.3%) as “high” transmission counties.

In Canada, the government’s chief health minister, Theresa Tam, confirmed that people who have been fully vaccinated have viral loads similar to the unvaccinated, meaning they can transmit the virus.

Theresa Tam, Canada's chief public health officer, says those with COVID who are double jabbed "have similar viral loads to those who are unvaccinated" and can still transmit to others.

Why are we discriminating against the unvaxxed again?