‘History Will Reflect on the Good Work’ Trump Has Done: Pompeo 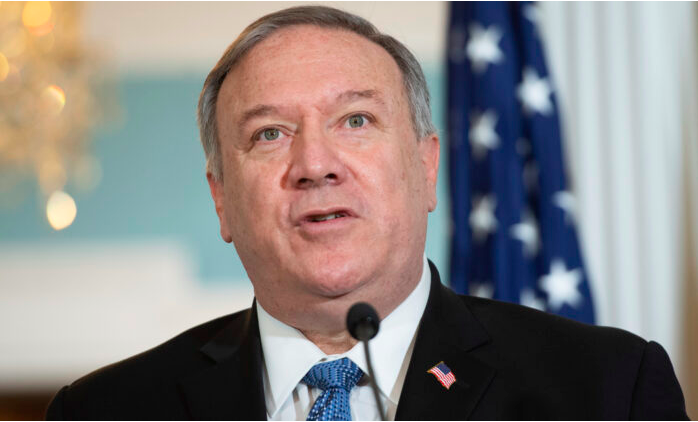 “Look, what happened that day was terrible, and I have said repeatedly that those folks who engaged in this activity need to be identified, prosecuted, and they are criminals and ought to be treated as such,” Pompeo said about the Jan. 6 breach of the U.S. Capitol.

“But history will reflect on the good work that this president and our administration has done. Those books will be written about the changes that we have made in the world, the recognition that we have taken about reality, sovereignty, respect for basic dignity and human rights, a return to the founding principles in a way that previous administrations had not done. I’ll let others write it, but I think that those actions—the actual things that happened—will be reflected in a way that shows there was good work done on behalf of the American people.”

Pompeo was speaking to the “Hugh Hewitt Show.”

Pompeo spent most of the interview discussing the Chinese Communist Party and the Trump administration’s relatively hardline stance against it, compared to past administrations.

Asked if he was worried that a Joe Biden administration would essentially be a third term of President Barack Obama, Pompeo said: “I don’t want to comment on the people, but the policy matters an awful lot.”

“You’ve seen President Trump and our administration lay out a robust response to the great power competition that the Chinese Communist Party presents to the United States. We believe we have the right end of the stick on this. We think this is the right direction of travel. We think the American people demand it.

“We have seen the world respond to this in positive ways.  We’ve seen the Australians do remarkable work in pushing back.  We’ve seen the Japanese, the South Koreans.  We’ve developed the Quad now with the Indians that is very powerful in simply saying no, we’re not trying to punish, we are not trying to contain China.  We are simply demanding that they engage in the world in a way that big nations with large economies, powerful militaries—we haven’t even talked about their missile program and their nuclear program—with countries that have real capacity to destabilize and make the world insecure.

Pompeo told The Epoch Times in a recent interview that America had ignored the nature of the communist party.

“President Trump recognized that when he began his campaign, and then when he took office, we’ve now changed fundamentally, how I think the West looks at China, not just the United States, even when you look at Europe and Australia and Southeast Asia, they know that the Chinese Communist Party is up to no good,” Pompeo said.

“We were involved in a very serious counterterrorism campaign, appropriately so. We took our eye off this enormous threat and now it’s upon us. It’s now inside the gates. The Chinese Communist Party is here in America, and the Trump administration has begun in every dimension to turn the ship in the right direction, to get America to once again do the right thing and protect itself from this communist threat in China.”

Pompeo while speaking to Hewitt also touched on how the Trump administration has “recognized reality” by designating the Houthis as a terrorist regime as part of an outlook that even critics admit has shifted workings in the Middle East. Trump has led peace agreements between several countries and Israel while strongly opposing Iran and its influence.

Jan Jekielek contributed to this report.