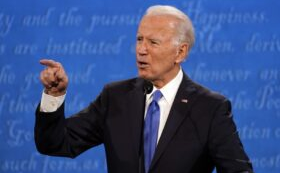 Joe Biden campaigned on a strict gun control platform, and he promised, “If you elect me, your taxes are going to be raised.” Now it looks like Biden has found a way to combine liberals’ two favorite pastimes: raising taxes and gun control.

If he’s sworn in next January, President Joe Biden may force Americans to pay $34 billion in taxes for the privilege of keeping the guns they already own, according to a brand new report from industry specialists.

Biden says he’ll ban what he calls “assault rifles,” like the AR-15—the most popular rifle in the United States—and he’ll force people to sell their guns to the government in a “buyback.” But for those who keep their guns, he plans to tax them.

Sponsored: The Most Powerful Superfood of Them All

Biden will force all Americans to register certain rifles and “high-capacity” handgun magazines capable of holding more than 10 rounds with the federal government, under the National Firearms Act.

Gun owners will have to pay the government $200 for each registration. For example, if someone owns one rifle and a handgun with three 12-round magazines, Biden would charge him an $800 registration fee.

Americans own at least 20 million rifles and 150 million ammunition magazines, according to a National Shooting Sports Foundation report released on Monday. That means Biden’s tax would cost law-abiding gun owners at least $34 billion to exercise their Second Amendment rights.

Americans support gun rights so much that the exact number of firearms they own is not known. Recent estimates have ranged from 270 million to 390 million. NSSF estimates that U.S. civilians own 434 million firearms, with around 214 million of those new guns being bought since 1991. But even that figure could be far lower than reality.

Americans bought a record-breaking 17 million new guns in 2020, according to a report from a group called Small Arms Analytics. And there’s no sign of the demand letting up.

“On Nov. 10, we eclipsed all of November 2019’s sales, so I think I can safely predict that this will be our busiest year in our 61-year history,” said Justin Anderson, the marketing director for Hyatt Guns of Charlotte, North Carolina. “The fear among consumers is palpable right now. It’s a scary world we’re living in today, and the likely election of the most anti-gun president in history only adds gasoline to the fire.”

Recent polls show public support for gun control legislation at the lowest point in years. But Biden, who passed a 10-year ban on “assault rifles” as part of a 1994 law co-sponsored by Chuck Schumer, may push forward with his plan through executive orders or other regulations that allow him to bypass Congress.

“The Biden gun control plan is the most aggressive and dangerous than we’ve ever seen put forward from a tier-one presidential candidate—and includes more than two dozen draconian objectives,” Erich Pratt, senior vice president of Gun Owners of America, said.

Biden has said he would tap former Congressman Beto O’Rourke to head up his anti-gun efforts.

“You’re going to take care of the gun problem with me. You’re going to be the one who leads this effort,” Biden told Beto in March. “I’m counting on you.”

O’Rourke has made no secret that he plans to take weapons out of the hands of legal gun owners, Last September, O’Rourke told gun owners, “Hell, yes, we’re going to take your AR-15, your AK-47.”

Biden is a decades-long gun-grabber whose own family is protected by the Secret Service. He wants you to pay for his protection—and then pay even more to protect your own, until he can find a way to wrench the gun out of your hand.

Of course, gun control has been the dream of every dictator and totalitarian in modern history, including Adolf Hitler, Josef Stalin, Mao Zedong, and Hugo Chavez.

Biden’s plan is all the more chilling now that a leader in the California Democratic Party says a President Biden should look for a way to “deprogram 75 million people” who voted for President Donald Trump.

Frank Holmes is a veteran journalist and an outspoken conservative that talks about the news that was in his weekly article, “On The Holmes Front.”