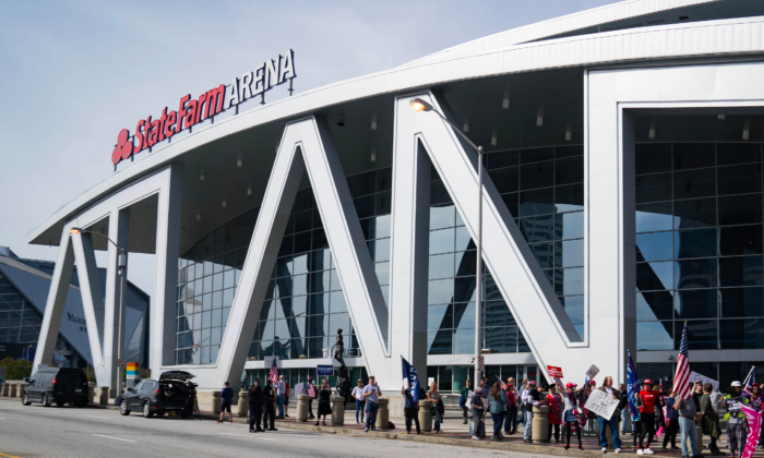 The plaintiff in an election lawsuit in Georgia on Monday served a subpoena on State Farm Arena seeking video footage filmed on the premises during and after Election Day.

The subpoena names the Atlanta Hawks, State Farm Arena, and Scott Wilkinson, the executive vice president and chief legal officer of both entities.

The plaintiff in the lawsuit, attorney Lin Wood, sent a public Twitter message on Nov. 23 to the defendant, Georgia Secretary of State Brad Raffensperger, citing the subpoena.

“Would someone ask my never-to-be friend Brad Raffensperger @GaSecofState if he has seen this type of election fraud at State Farm Arena,” Wood wrote. “Several people have seen it. Many more will see it soon. The video camera eye does not lie. How do you spell Election Fraud?”

Judge Steven Grimberg on Tuesday stayed the discovery in the case in response to a challenge to the subpoena filed by some of the defendants.

“Please note that the court has currently stayed any discovery by either party,” Wilkinson wrote in an email to The Epoch Times.

Wood’s subpoena further demands all documents related to plumbing issues on the premises during the Nov. 3-5 time frame. The request is linked to a pipe that purportedly burst in State Farm Arena on the morning of Election Day. County officials said on the night of Nov. 3 that the plumbing incident caused a two-hour delay to vote counting in a room where absentee ballots were tabulated.

A local attorney who filed records requests about the burst pipe only received a brief text message exchange about the incident describing it as “highly exaggerated … a slow leak that caused about an hour-and-a-half delay” and that “we contained it quickly—it did not spread,” according to a record the attorney, Paul Dzikowski, shared with The Epoch Times.

“As it turns out, there never was a burst pipe or water main, which some news outlets reported,” Dzikowski told The Epoch Times in an email.

“The water inside [State Farm Arena] was caused by a leaking toilet, which, as you know, can be remedied by simply hand-turning off the water supply line to the toilet. In any event, the leak was minimal and was resolved in the early morning hours, well prior to the time the elections staff halted the counting.”

“In Georgia, a pipe burst in a far away location, totally unrelated to the location of what was happening and they stopped counting for four hours,” the president said.

After a risk-limiting, Georgia certified former Vice President Joe Biden as the winner of the presidential election in the state. Trump has not conceded the race and his campaign has said that a lawsuit will soon be filed in Georgia. On Tuesday, the Peach State will begin a recount requested by the Trump campaign.

Trump is also litigating election challenges in Michigan, Pennsylvania, and Nevada, while a recount is ongoing in two counties in Wisconsin.