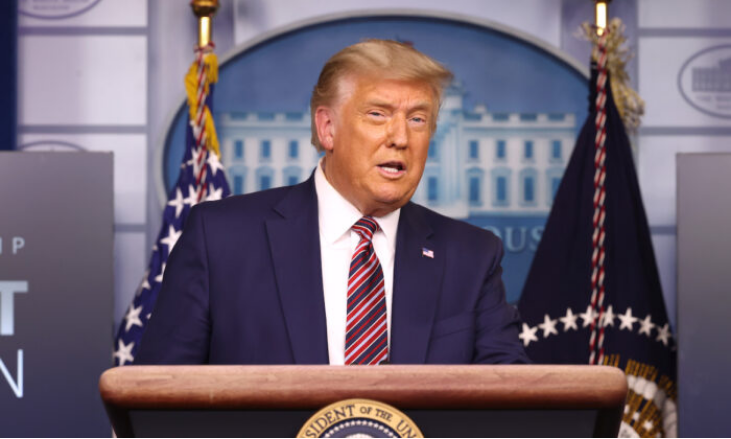 President Donald Trump on Friday announced measures that he says will “dramatically lower” the price of prescription drugs for Americans.

The first action ends rebates to middlemen in Medicare and passes those rebates to Americans.

“Currently, drug companies provide large discounts on the price of prescription medicines, including nearly $40 billion in rebates to Medicare Part D plans last year alone,” Trump said at a press conference on Friday. “Yet often, middlemen stop those discounts from going to the patients.”

“Today’s action ends this injustice and requires that these discounts go directly to the people. These are the people that need it,” Trump said, adding that savings could amount to up to 30 or even 50 percent. “That doesn’t include lifesaving drugs like insulin, which will be even higher [in percentage of savings],” he said.

The second action, the Most Favored Nation rule, seeks to have Medicare observe and match the lowest price charged for the same drugs in other developed countries. Trump said this rule, which takes effect Jan. 1, 2021, will end “global freeloading” on American patients.

“Until now, Americans have often been charged more than twice as much for the exact same drug as other medically advanced countries. We would be having a drug—identical drug, same company—and we’d pay many times the price of what that drug would sell for in certain countries,” Trump said.

“In case after case, our citizens pay massively higher prices than other nations pay for the same exact pill, from the same factory, effectively subsidizing socialism aboard [abroad] with skyrocketing prices at home. So we would spend tremendous amounts of money in order to provide inexpensive drugs to another country.

Trump also announced that his administration will also be ending the 2006 Unapproved Drugs Initiative (UDI), which was designed to prevent the use of drugs not approved by the Food and Drug Administration (FDA).

The president said that the UDI has instead allowed drug manufacturers to exploit older generic drugs.

“In the past, drug companies have been allowed to identify certain very old generic drugs that have been widely available for decades and exploit a misguided program … to obtain market exclusivity on these medicines,” Trump said.

He said the UDI program “hasn’t been too good for the people that we’re supposed to benefit,” because drug companies have increased prices by 1,000 to 5,000 percent on certain drugs. Furthermore, certain important medicines have faced shortages under the program, he said.

“Together, these reforms will save American patients many, many billions of dollars every single year,” Trump said.

The rule would apply to 50 medications that account for the highest spending under Medicare’s “Part B” benefit for outpatient care, covering many cancer drugs and other medications delivered by infusion or injection in a doctor’s office.

“While there are market forces and negotiations that serve to reduce cost in other parts of the healthcare system, it just doesn’t exist in Part B, which pays for drugs that you get in a doctor’s office: cancer drugs and other infusions,” said Seema Verma, administrator of the Centers for Medicare and Medicaid Services.

“In Part B, American seniors and taxpayers pay whatever drug companies want to charge. And doctors also get paid a percentage add-on. So the higher the drug costs, the more they get paid, giving an overt incentive to prescribe higher-priced drugs and for manufacturers to increase those prices. And so it’s no wonder that American seniors are paying twice as much as what other countries are paying.”

Verma said that Medicare spending for Part B drugs has increased by an average of 55 percent.

“Drug spending in Part B is responsible for over a third of the premiums that our seniors pay,” she said. “The bottom line is: Higher drug costs lead to higher premiums and higher copays. Doctors do well, drug companies do well, but patients pay more. This effort is going to save over $85 billion over seven years, and saving seniors over $28 billion as well.”

The pharmaceutical industry said Trump’s approach would give foreign governments the “upper hand” in deciding the value of medicines in the United States and vowed to fight it.

“The administration is willing to upend the entire system with a reckless attack on the companies working around the clock to end this pandemic,” the Pharmaceutical Research and Manufacturers of America said in a statement, adding that it is “considering all options to stop this unlawful onslaught on medical progress and maintain our fight against COVID-19.”

Meanwhile, the U.S. Chamber of Commerce said the “most favored nation” rule would lead to harmful price controls that could jeopardize access to new lifesaving medicines at a critical time.

‘Fighting for the American People’

Health Secretary Alex Azar said that the administration is replacing “a broken system of shadowy kickbacks” that hiked prices year by year to one that will provide “up-front discounts in Medicare, delivered straight to the patient at the pharmacy counter.”

Azar praised Trump for his passion for reducing prescription drug prices and revisited the unveiling of drug pricing reform in May 2018.

“The president’s blueprint was clear: We need to put American patients first, and our drug pricing system too often puts them last. The system had to change,” Azar said.

“The blueprint called for tackling foreign freeriding, for bringing down high list prices, for reducing out-of-pocket costs, and for better negotiation by our government programs. That’s what the president has delivered over the last two years already, and that’s what the president is delivering today with these new, historic reforms.”

He added, “The president’s actions today, boldly take on the big drug companies, take on the middlemen, and take on foreign countries freeriding off of Americans.”

Trump signaled his passion for standing up for the American people against Big Pharma.

“For generations, the American people have been abused by Big Pharma and their army of lawyers, lobbyists, and bought-and-paid-for politicians. But I’ve [never] been loyal to the special interests; I have been loyal to our patients and our people that need drugs—prescription drugs—and devoted myself completely to fighting for the American people,” he said. “You see that. This is not an easy thing to do.”