Trump at 49% approval, with Congress left in the dust – Pelosi upside down with only 1 in 3 voters in favor of her performance 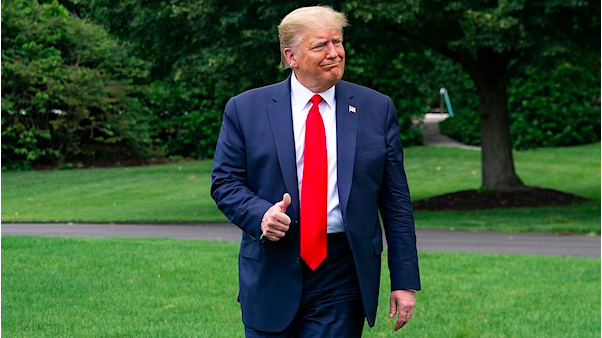 President Donald J. Trump walks from the Oval Office to the South Lawn of White House to board Marine One for Joint Base Andrews Maryland Friday, June 5, 2020, to begin his trip to Bangor, Maine. (Official White House photo by Tia Dufour)

A new survey, conducted after the Jan. 6 breach of the U.S. Capitol, has President Trump with a 49% approval rating, about as high as presidents generally get.

For Congress, however, only 28% of voters approve of its performance while 72% disapprove, according to pollster John McLaughlin, reported Paul Bedard in his “Washington Secrets” column for the Washington Examiner.

House Speaker Nancy Pelosi, leading a second impeachment effort, earned only 33% approval and 59% disapproval. Senate Minority Leader Chuck Schumer is in worse shape than Pelosi. He was at 27% approval to 51% disapproval.

McLaughlin’s summary said: “Voters are opposed to impeachment and Big Tech censorship, and they want a peaceful and orderly transition. Voters strongly prefer that Congress deal with fighting coronavirus and not impeachment. Impeachment is viewed as a waste of time and money. Voters believe that the Democrats are playing politics and that continuing to attack the president is making it worse. They also believe that Big Tech is violating free speech and if they can do it to President Trump, they can do it to any American.”

Sixty percent say Pelosi’s latest impeachment effort is a waste. She wants President Trump removed and punished to make sure he doesn’t run again in 2024.

A huge 77% of voters think Congress this week should be focusing on the coronavirus, and 74% say efforts by Pelosi to impeach the president after Joe Biden is sworn in “would be politically motivated to prevent the president from running again.”

Biden and Pelosi, by continuing their attacks on the president, are “making this worse and keeping the country divided,” 65% say. That’s despite Biden’s repeated claims that he wants to unite the nation.

Nearly half, 48%, of all voters say they are less likely to vote for a member of Congress who votes to impeach. And 74% say if Twitter, Facebook and Google can censor and take away the president’s right to free speech, they can do it to anyone.

Seventy percent of those voters believe the social media companies “have too much power and need to be regulated.”

McLaughlin found battleground voters are more eager for the nation to move on rather than focus on punishing President Trump.