Trump’s Legal Team Confirms: He Won By A Landslide 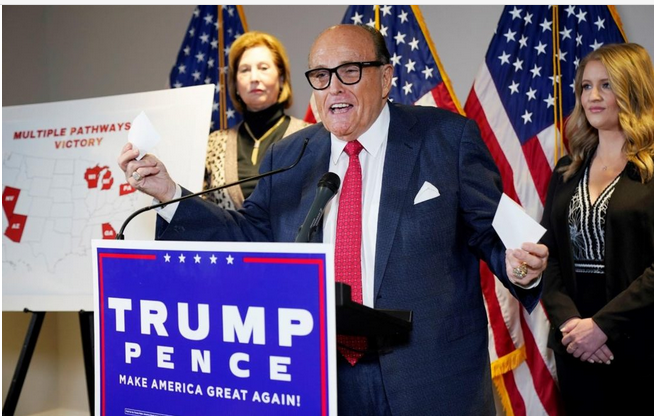 From state to state there are reports ranging from cheating poll workers, crooked officials, trucks full of ballots (being counted 3x), software “glitches,” and dead family members voting. President Trump won a historic number of votes—yet a man with dementia, who held zero rallies beat him? Something is differently off.

President Trump has vowed to battle the results from many states, taking the case all the way to the Supreme Court. His legal team has been hard at work, compiling evidence despite pressure from the media to give up. This week, they appeared at a press conference to drop a bombshell on the country.

Former New York City Mayor and lawyer to the president, Rudy Giuliani, said that in states including Georgia, Pennsylvania, Michigan, Wisconsin, Nevada, and Arizona, the legal team has found “more than double the number of votes needed to overturn the election, in terms of provable, illegal ballots.”

He also claimed there was voter fraud in “big cities” controlled by Democrats. “The number of voter fraud cases in Philadelphia could fill a library,” Giuliani said…

“This is stunning, heartbreaking, infuriating and the most unpatriotic act I can even imagine for people in this country to have participated in in any way, shape, or form,” Powell said. “And I want the American public to know right now that we will not be intimidated.” [Source: Daily Wire]

This intense press conference was far from the final word on the election. Attorney Jenna Ellis called it their “opening statement,” revealing that more evidence will come out in the court of law. She then went on to brutally humiliate the media, making it clear that their opinions don’t decide the truth.

As usual, the media is trying to burying this news. They have colluded to push Joe Biden forward as the winner, despite growing evidence that the current “results” of the election are illegitimate. The media rushed to call the race before many challenges played out. Even Georgia’s “recount” is fraudulent, since they did not bother to shift out obvious illegal ballots.

Plan to learn more about this in the coming days and weeks. It’s not easy holding out for results of something so important—but it’s worth the fight. Democrats just want Trump and his supporters to pack in and give up. But too much is at stake. If the evidence we’ve seen turns out to be real (including signed affidavits and convincing video, etc.), then many heads will roll.

Trump promised to drain the swamp—this just might be his biggest chance at it yet.