Tucker Carlson: Why Democrats wanted to impeach Trump again, and why the GOP went along 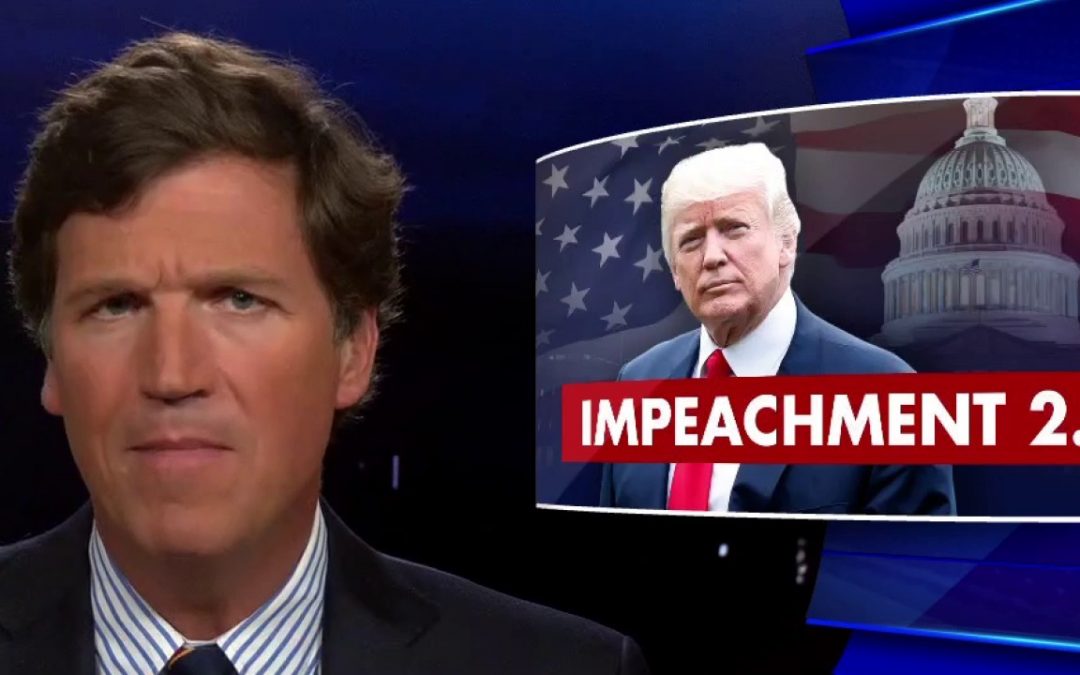 President Trump was impeached Wednesday with bipartisan support. No matter how angry you may be at Trump over what happened at the Capitol building last week, watching this happen may confuse you.

The chaos of an impeachment trial is hardly the peaceful and orderly transition of power both parties assure you they want. So why are they doing this? There has to be a reason, and indeed there is one.

First, let’s be clear about what that reason is not. Legitimate moral outrage will play absolutely no role whatsoever in whatever happens next, no matter how many times House Majority Whip Jim Clyburn, D-S.C. goes on television and talks about the civil rights movement or how often you see House Speaker Nancy Pelosi, D-Calif., read lines like this:

PELOSI: We know that we face enemies of the Constitution. We know we experienced the insurrection that violated the sanctity of the people’s Capitol and attempted to overturn the duly recorded will of the American people. And we know that the president of the United States incited this insurrection, this armed rebellion against our common country. He must go. He is a clear and present danger to the nation that we all love.

At this point, it’s worth recalling that for decades, and not that long ago, the two most powerful Democrats in the United States Senate were Ted Kennedy and Robert Byrd. Ted Kennedy left a young woman to drown in a drunk driving accident. Robert Byrd was a recruiter for the Ku Klux Klan. Democrats did not seem bothered by any of that. They praised Kennedy and Byrd at every turn, including at their funerals.

So, no, Democrats are not actually outraged in any moral sense by Donald Trump. They never have been. They’re too cynical to have feelings that authentic. As if to prove that point, they’ve named as one of their so-called impeachment managers Rep. Eric Swalwell, D-Calif., who as a sitting member of Congress had sex with an actual Chinese spy.

So spare us the self-righteous indignation. What’s happening here instead is old fashioned, hard-eyed politics. Democrats have every practical reason for wanting to see Trump impeached during his final days in office.

The first and most obvious reason is to make Republicans weaker. Every loss diminishes a political party, and impeachment is nothing if not a loss. But there’s another thing: Democrats need to keep talking about Donald Trump, next week and forever, if they’re going to keep their own party together.

Most political coalitions are built on shared interests. The Democratic coalition is built on shared genetics. The basic idea is that everyone who’s not a straight White man must be united as one in unshakable solidarity. The problem is that can’t happen because it’s not true in real life. Many Democrats have nothing in common with each other. Once Donald Trump leaves the scene and it’s time to divvy up the spoils of the United States Treasury to begin the great piñata party of 2021, various components within the Democratic Party — the fabled communities you hear so much about — will turn on each other with feral ferocity. It’s going to be ugly.

Democrats would like to delay that disaster as long as they can, so they need to keep Donald Trump at the center of the conversation. They’re impeaching him so they can continue to give speeches about him. It’s that simple.

But why are Republicans playing along? They don’t really have a sound political rationale for any of this, they’re just dumb and guilty.

Here’s how it works from the perspective of the Republican leadership: It would be best if Donald Trump just went away forever. He’s embarrassing. They don’t want to talk about him. They’d like him to disappear. So that’s their plan with impeachment. Make it so that Trump can never run for office again, not that he actually planned to, and then disgrace Trump so thoroughly that he cannot appear in public ever again, then pretend that Donald Trump never happened.

Call it the suburban Connecticut denial strategy. “Whatever you do, don’t talk about mom’s alcoholism. Just act like it’s not happening and maybe it’ll go away.”

It’s not complicated, but apparently it’s too complicated for the dummies in the Republican Party who think impeachment will help them in the long run. Maybe you shouldn’t be surprised by that. These are the very same people who still defend the war in Iraq, who tell you with a straight face that Iran is the single biggest threat we will ever face as a nation. Not your falling wages or runaway health care costs or the hollowed-out economy that feels like it’s about to collapse or the Chinese fentanyl that just killed your nephew. No, Iran, an isolated, faraway country you could not find on a map at gunpoint, is the real threat.

The amazing thing is, they mean it when they say it, that’s how stupid and brainwashed they are. And by the way, they’re so dumb, they assume you agree with them. They have no idea what you really think. They haven’t spent five minutes wondering why you voted for Donald Trump in the first place, and by the way, they don’t care.

THESE ARE THE TEN REPUBLICANS WHO VOTED TO IMPEACH TRUMP

The sad thing is a smart party could do a lot for itself and for the country with a moment like this. A week ago, a violent mob attacked the Capitol. Republicans should have no problem opposing that. It ought to be consistent with what they’ve been saying for decades.

“Republicans are for law and order. Smash a cop in the face with a fire extinguisher, go to jail. Break windows, hit people with flagpoles, same thing. We’re Republicans, we have no tolerance for that kind of crap. This is a civilized country. We won’t put up with it the next time a mob gathers outside the U.S. Capitol building or, by the way, outside a Wendy’s in Minneapolis or a federal building in Seattle or occupies a commercial district in Portland, Ore., by force.”

Republicans can say that loudly and with a clear and consistent conscience. Laws are real, and they apply to everyone equally. That is the Republican position.

It is not hard, but apparently it is because for the last week, slow learners like Mitch McConnell have missed it completely. They’ve allowed themselves instead to be led into rhetorical cul-de-sacs on the question of Donald Trump’s personal character. At no point does it seem to have occurred to McConnell or any of the geniuses clustered around him that what is really at stake right now is not the future of Donald Trump, but instead the future of his voters, tens of millions of them, who in the space of the last seven days have seen themselves recast as domestic terrorists. That has happened, but Republicans in Washington don’t seem to have noticed.

Just today, former Major League Baseball pitcher Curt Schilling announced that he has had his personal insurance policies canceled by his insurer. Why? Because Curt Schilling wrote a social media post defending Donald Trump, and in 2021, that’s not allowed. You could lose your insurance for that. You could also lose your bank account, your website, your access to email and social media, your ability to communicate with the outside world, and there’s nothing you can do about it because you can also lose your lawyer.

How long before they cut off your water and electricity? Before UPS won’t deliver your packages? And not to wreck your day, but guess what? Amazon is now one of America’s biggest grocery providers. Good thing you don’t need to eat.

But no problem, says Mitch McConnell, the real problem is Donald Trump, and once he’s gone, everything will be fine.

This article is adapted from Tucker Carlson’s opening commentary on the Jan. 13, 2021 edition of “Tucker Carlson Tonight”