10 Things to Eliminate for Better Health 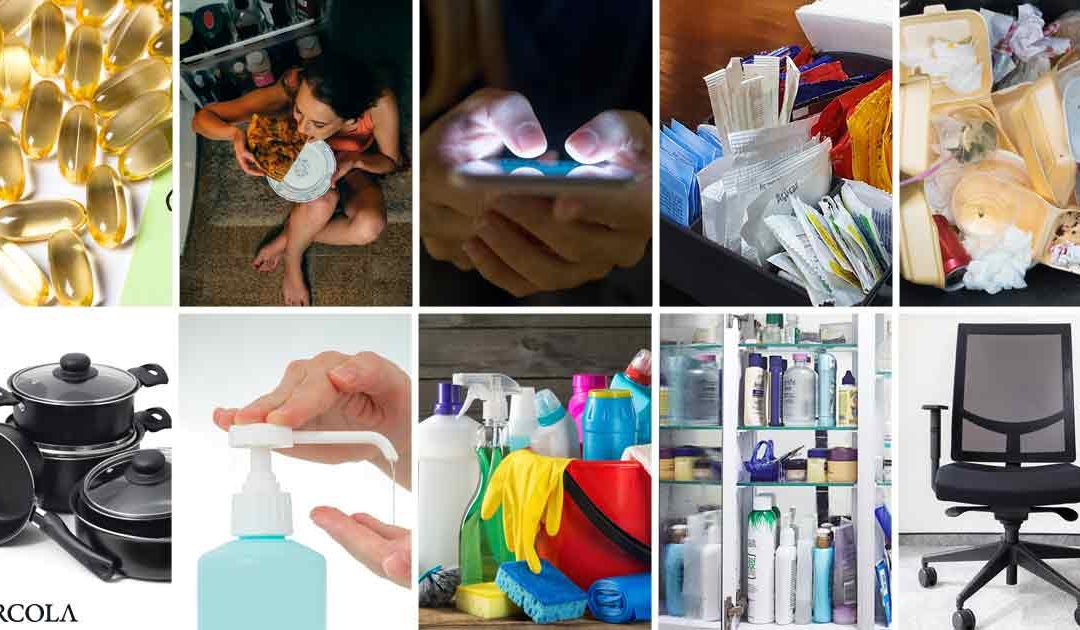 For more than two decades, it’s been my goal to empower you with tools to take control of your health and improve your quality of life and well-being. An estimated 60% of Americans say they want to feel healthier,1 yet only 2.7% actually meet the definition of leading a healthy lifestyle.2

While it can feel overwhelming to overhaul your physical activity levels and eating habits, breaking down the changes into “bite-sized” steps makes it much more manageable.

The information that follows is an example of straightforward, powerful strategies that can make a dramatic difference to your health, even if you institute it one step at a time. By removing these items from your life, you eliminate exposure to toxic influences that contribute to disease and malaise, while opening space for the introduction of health-promoting influences in their place.

Eliminate These 10 Things for a Healthier Life

1. Linoleic acid — Linoleic acid is the primary fat found in polyunsaturated fatty acids (PUFAs), including vegetable/seed oils, and accounts for about 80% of the fat composition of vegetable oils. Omega-6 fats must be balanced with omega-3 fats in order to not be harmful, but this isn’t the case for most Americans. Most of the omega-6 people eat, including seed oils, has been damaged and oxidized through processing.

Metabolic dysfunction can also occur, while OXLAMs are toxic to the liver and are associated with inflammation, fibrosis and fatty liver disease in humans.4 Linoleic acid is found in virtually every processed food, including restaurant foods, sauces and salad dressings, so to eliminate it you’ll need to eliminate most processed foods and restaurant foods from your diet — unless you can confirm that the chef only cooks with butter.

However, because animals are fed grains that are high in linoleic acid,5 it’s also hidden in “healthy” foods like chicken and pork, which makes these meats a major source as well. Olive oil is another health food that can be a hidden source of linoleic acid, as it’s often cut with cheaper seed oils.

2. Eating after dinner — The timing of your meals is nearly as important as the foods that make them up. Time restricted eating (TRE) is a simple powerful intervention that mimics the eating habits of our ancestors and restores your body to a more natural state that allows a whole host of metabolic benefits to occur.6

TRE involves limiting your eating window to six to eight hours per day instead of the more than 12-hour window most people use. Research shows, for instance, that TRE promotes insulin sensitivity and improves blood sugar management by increasing insulin-mediated glucose uptake rates,7 which is important for resolving Type 2 diabetes.

In another study, when 15 men at risk of Type 2 diabetes restricted their eating to even a nine-hour window, they lowered their mean fasting glucose, regardless of when the “eating window” commenced.8 Ideally, you’ll want to stop eating for several hours before bedtime, then start your eating window in mid- to late morning after you wake up.

3. EMFs and cellphones — Most cellphones include a little-known warning that states to keep the phone a certain distance away from your body — usually 5 to 15 millimeters (mm) — to limit exposure to radiofrequency (RF) exposure to under the federal safety limit.9 If you carry your phone in your pocket or your bra, or hold it against your ear when you talk, you’re violating this warning with unknown health consequences.

Devra Davis, Ph.D., founder and president of the Environmental Health Trust, has warned for years about the risks of cellphones in general but, in particular, about the risks to pregnant women and their unborn children, noting that prenatal animal studies have shown exposure to radiation from cellphones:10

While most people won’t want to eliminate their cellphone entirely, avoid carrying it on your body and keep it in airplane mode as much as possible. However, even in airplane mode it can still emit signals, which is why you should not sleep with it in your bedroom and should turn it off at night.

4. Artificial sweeteners — Consuming artificially sweetened foods and beverages leads to disruptions to metabolism13,14 and has been linked to increased appetite and cravings, as well as an increased risk of diabetes and other metabolic diseases.15,16

The artificial sweeteners acesulfame potassium and sucralose — brand name Splenda —may even interfere with your liver’s detoxification process, as research found they inhibited the activity of P-glycoprotein (PGP), a “defense protein” that’s important for protecting organisms against environmental toxins.17

Because PGP also plays a role in other body functions, including maintaining the blood-brain barrier, the researchers stressed the need for further research to determine how artificial sweeteners may be affecting other organs beyond the liver. A large-scale cohort study also found that people who consumed higher levels of artificial sweeteners, including aspartame, had higher risk of overall cancer compared to nonconsumers.18

Specifically, total cancer risks increased by 13% among artificial sweetener consumers, while the risk of breast cancer rose by 22% and the risk of obesity-related cancers increased up to 15%.19 In addition to their common usage in diet beverages and low-sugar snacks, be aware that artificial sweeteners are hidden in many products that might surprise you, including dairy products, ketchup, salad dressing, baked goods and medications.

5. Plastic food containers and bottles — If you’re still storing your food in plastic containers or drinking from plastic bottles, switching to safe alternatives like glass, ceramic and stainless steel is a smart choice.

Microplastics, which are simply tiny pieces of plastic, are common in bottled water, for starters. When researchers with the department of chemistry at the State University of New York at Fredonia tested 259 bottles of water, they found microplastic contamination in 93% of them.20

It’s unknown what health risks are posed by consuming these tiny plastic particles, but it is known that microplastics may act like sponges for contaminants including heavy metals, persistent organic pollutants, polychlorinated biphenyls (PCBs) or pathogens, or could cause harm on a cellular or subcellular level.21

Plastics can also leach chemicals into your food and beverages. Phthalates are just one example of high-production volume chemicals used frequently as plasticizers in polyvinyl chloride (PVC) and other plastics, some of which are used in food packaging used by fast food and take-out restaurants. The risk may be even greater if you heat food in plastic or even let a plastic water bottle sit in the sun.

For instance, antimony, a toxic chemical used to manufacture polyethylene terephthalate (PET) plastics used for water bottles, is known to leach into water, and a study found that storing the bottles at higher temperatures increased the amount of leaching.22

6. Nonstick cookware — The convenience of a nonstick surface comes at a steep price, as chemicals used in their production persist in the environment, are contaminating water supplies and have been linked to developmental problems, cancer, liver damage, immune effects, thyroid problems and more.

Polyfluoroalkyl or perfluoroalkyl chemicals (PFASs), which include PFOA and PFOS, are estimated to be in the blood of more than 98% of Americans.23 While production of PFOA ended in 2015, DuPont and other companies have substituted similar chemicals in the production of nonstick cookware.

In May 2015, more than 200 scientists from 40 countries signed the Madrid Statement, which warns about the harms of PFAS chemicals and documents the following potential health effects of exposure:24

Healthier options include ceramic and enameled cast iron cookware, both of which are durable, easy to clean and completely inert, which means they won’t release any harmful chemicals into your home.

AMR has been declared one of the top 10 global public health threats to humanity,25 causing about 700,000 deaths globally every year.26 The use of antibacterial soap even causes shifts in the microbial composition of your skin, which could affect skin health.27

Antibacterial products may also contain triclosan, an antibacterial chemical and known endocrine disrupter. It’s so widely used that it’s estimated 75% of the U.S. population has been exposed, a concerning statistic since it is readily absorbed into human skin and oral mucosa, where it may affect immune responses, production of reactive oxygen species and cardiovascular functions.28 Reproductive and developmental effects have also been observed.

Unless you are in a hospital setting, avoid antibacterial soaps and detergents, including hand sanitizers and wipes, toothpaste, deodorants and laundry detergents.

The good news is that it’s easy to replace chemical cleaners with a short list of basic ingredients, which can be used to make your own natural cleaning products:

9. Toxic personal care products — Personal care products often contain endocrine-disrupting chemicals, including phthalates and parabens, and toluene, a neurotoxicant. Very few chemicals on the market are tested for safety, but even those that aren’t necessarily safe. Part of this is because safety testing is typically done on just one chemical at a time, and under laboratory conditions.

The way you’re actually exposed to chemicals — in combination and under countless different real-world scenarios — may increase their toxicity exponentially. It’s possible that use of personal care products and cosmetics may influence age at menopause,31 along with having a baby that’s at increased risk of being small for gestational age.32

At least 11 chemicals and chemical families of concern have been uncovered that are commonly used in cosmetics. They include:33

10. Your chair — Sitting is a pernicious negative influence on your health, as being sedentary for long periods of time each day appears to accelerate aging at the cellular level.34 Among close to 1,500 older women included in one study, those who sat the longest were, on average, eight years older, biologically speaking, than women who moved around more often.35

Separate research, published in the American Journal of Preventive Medicine, further found that sitting for more than three hours a day caused 3.8% of all-cause deaths in the 54 countries surveyed.36

Cutting your sitting time to less than three hours a day could increase your life expectancy by 0.2 years, the researchers concluded. More than 60% of people globally spend more than three hours a day sitting,37 so “sit less, move more” is a motto worth repeating. A simple way to do this is to replace your desk chair with a standup desk and walk each day as much as possible.

Remember, while I encourage you to work your way through each item on this list, you don’t have to eliminate them all overnight. With each toxic exposure you remove from your life, you’ll enjoy better health and receive renewed motivation to keep going on your quest toward reaching optimal health.