There are now 4,415 cases including 37 deaths, 42 permanent disabilities, 420 ER visits, and 154 hospitalizations following the injection of these new booster shots from Pfizer and Moderna. (Source.

The Bivalent boosters were just authorized by the FDA on September 1, 2022, and then authorized for children on October 12, 2022. 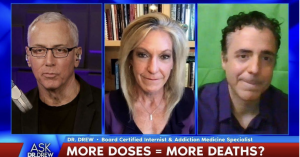 Dr. Spiro Pantazatos, PhD, an Assistant Professor of Clinical Neurobiology at Columbia University Irving Medical Center and also a Research Scientist at the New York State Psychiatric Institute with a special focus on biomedical informatics, computational neuroimaging, neuroscience, and mental health, recently appeared on the Dr. Drew show and explained how he saw an increase in mortality rates following the COVID-19 mandates in 2021, and co-authored a study documenting his research.

A search in the medical literature indexed at the U.S. Government’s National Library of Medicine shows that Dr. Spiro Pantazatos has authored over 40 published studies.

But no journal would publish his results on mortality following the experimental COVID shots in 2021.

At the outset of the pandemic, Dr. Spiro Pantazatos, a clinical neurobiologist and researcher at Columbia University (on leave), vowed he would stay in lockdown until a vaccine was available. He was a believer. But then he began to question the story being told. Next, he studied the data.

Dr. Pantazatos has found a clear link between the rollout of experimental mRNA vaccines and excess mortality numbers. While life insurance companies began screaming from the rooftops in the late spring of 2022, Dr. Pantazatos was well ahead of the game, producing a paper that demonstrated this link in October 2021. But nobody wanted to read his findings, and no medical journal would publish the paper. “It was diplomatically rejected by many editors at medical journals,” he told Dr. Drew.

Dr. Pantazatos’ paper comes to a simple conclusion using publicly available data; the more vaccines administered, the higher mortality observed. “The number of deaths in each state correlated with the number of vaccinations administered in the previous month,” he said.

However, a basic tenet of data comparison and scientific research says that correlation does not mean causation. In this case, it gave medical journals the opportunity to dismiss his findings by saying that nobody knew if it was the vaccines causing these mortality spikes.

But Dr. Pantazatos subsequently cross-referenced his data with that of VAERS deaths, which only strengthened his conclusion that vaccines and excess mortality are linked. His data show that in February, March, and April of 2021, excess mortality was only statistically noticeable in the older age groups. It was not until May that you start to see this in younger age groups,” he said. “The fact that this pattern emerged from the data indicated to me that this is a real signal because that matches the temporal rollout.”

Nobody wanted to know. “When I first had these findings, I thought I had to get it to The Lancet immediately as they have a rapid publishing arm and even in-house statisticians. But they rejected it.” Dr. Pantazatos appealed, explaining that it wasn’t your usual covid submission. “I thought they’d want to get the information out there before the first booster shots.”

Dr. Pantazatos still has no explanation for the continued stonewalling of his findings. He suggests many reasons, including a conflict of interest between scientific journals and big pharma and the possibility that he was just too far ahead of the curve. “At the time, it was too against what everyone was saying. I think the journals have a fear of retraction. They were acting under peer pressure and had a fear of publishing something that was so different in its conclusions.” (Source.)

Watch this 5 and a half minute clip of his interview with Dr. Drew that RAIR Foundation created: