The Federal Reserve is going to have to play catch up.

A month ago, after the last meeting of the Federal Open Market Committee (FOMC), Fed Chairman Jerome Powell said that a 75-basis point hike was not something the committee was considering. Following the meeting, there was a lot of dovish talk about the Fed pausing in September after a couple of 50-basis point hikes.

On Monday night, however, the Wall Street Journal published a piece that appears to be a message from Fed officials that they are going to announce a three-quarter of a point hike when the two-day FOMC meeting concludes tomorrow. Certainly, the futures market is convinced of this. A week ago, it had the odds of a 75-basis point hike at just under four percent. As of Tuesday afternoon, that had risen to 95 percent.

What changed, of course, is that inflation did not slow or moderate as many Fed officials apparently thought it would. March’s 8.5 percent annual gain in the Consumer Price Index (CPI) turned out not to have been “peak inflation.” After dipping slightly to 8.3 percent in April, it jumped back up to 8.6 percent in May, the highest in decades. Measures of underlying inflation, such as the Cleveland Fed’s trimmed mean CPI, showed inflation becoming more ingrained in the economy.

Perhaps more importantly, in terms of the Fed’s reaction, was the change in inflation expectations. The Fed’s house view is that inflation is easier to tame so long as inflation expectations remain “anchored.” In particular, the Fed tends to watch the longer-term expectations, since short-term expectations can be volatile and are often just extrapolations of food and gasoline prices. The five to 10 year expectation in the University of Michigan survey showed inflation expectations had jumped from three percent to 3.3 percent, a figure that is probably intolerably high for many Fed officials. The risk is that ongoing inflation will keep pushing it even higher. Once the anchor is broken, the ship is adrift on the tides of inflation. So the Fed will feel pressure to re-establish its credibility on inflation by making a bigger move.

The Producer Price Index (PPI) released Tuesday showed that prices accelerated from the perspective of businesses, rising 0.8 percent in May compared with 0.4 percent in April. Energy prices, of course, were behind the very strong headline figure, rising five percent in May after a 1.6 percent rise in April. Food prices stabilized, with no month-over-month gain, but they are 13 percent higher than a year ago after several months of strong gains. Perhaps more importantly, PPI excluding food and energy was up 0.7 percent month over month. Services PPI was up 0.4 percent, an indication that this is demand driven rather than purely a supply-chain issue. In short, there was nothing in the PPI report to reassure Fed officials that inflation was moderating. 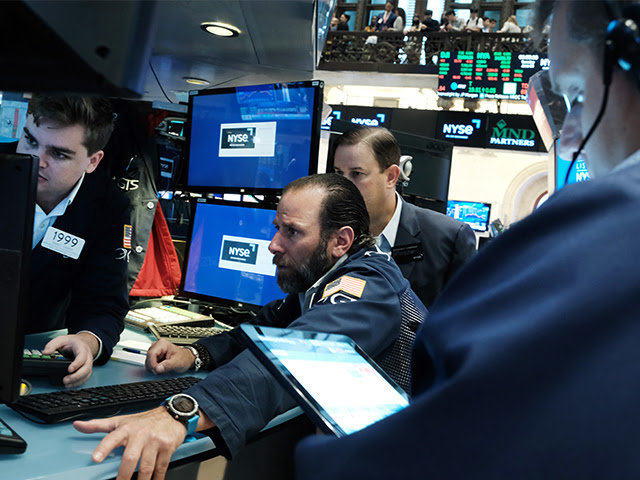 Traders work on the floor of the New York Stock Exchange (NYSE) on Tuesday, June 14, 2022. The Dow dropped over 800 points on Monday, sending the market into bear territory as fears of a possible recession loom. (Spencer Platt/Getty Images)

We suspect the market has it right. The Fed is going to need to do a 75-basis point hike at the current meeting. By preparing the market for the hike through the Wall Street Journal article, the Fed has seen to it that there will likely not be a big sell-off in reaction to that size of a hike, providing some relief from worries that it could cause a crash.

The problem with that strategy is that a surprise might actually benefit the fight against inflation. A bigger than expected hike would jolt long-term rates and push down asset prices, effectively tightening the financial conditions earlier than a series of expected hikes would do. We doubt, however, that Jerome Powell has it in him to shock the market with a 100-basis point hike tomorrow.