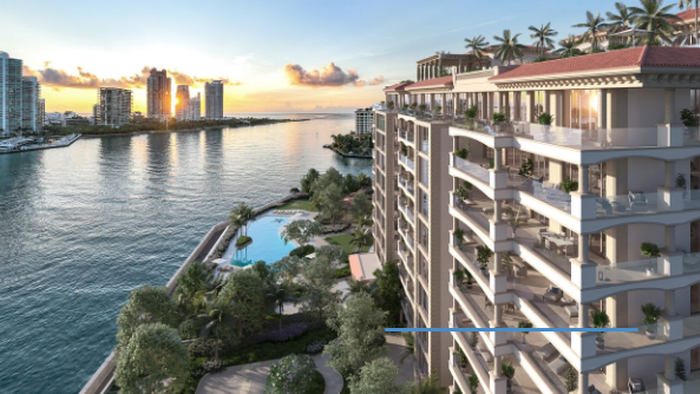 The latest sign South Florida’s high-end single-family luxury market continues to defy gravity is a condominium project on Fisher Island, an exclusive island only accessible by ferry, located off the southern tip of Miami Beach.

WSJ reported that Miami-based real-estate firm Related Group is asking a whopping $90 million for a condo on the island, considered one of the wealthiest ZIP Codes in the country.

In September, Related purchased a 6.5-acre plot of land on the island for $122.6 million with its partners Teddy Sagi, BH Group, and Wanxiang America RE Group. The developers are planning to begin construction in the third quarter of 2023.

The $90 million asking price for the 15,000-square-foot penthouse would exceed the current record sale, held by billionaire hedge fund manager Ken Griffen who paid $60 million for a Miami Beach condo in 2015.

WSJ noted more than 20 high-net-wealth families had shown interest in purchasing units at the future building — all buyers are expected to pay cash:

“These are people who don’t deal with mortgages or interest rates.

“We haven’t seen the economy have an effect on this group,” Jon Paul Perez, president of Related Group, said.

Even if the South Florida real estate market cools next year as recession risks mount, and home prices could drop as much as 20%, the Dallas Federal Reserve recently warned — a markdown of the asking price would still exceed Griffin’s record.

Perez said the penthouse was initially set for a $60 million ask, but his firm increased the price by 50% after crunching the numbers. He said a second penthouse at the building, with 10,000 square feet of space, would command an asking price of $60 million.

And just miles away in Miami, a new supertall tower measuring more than 1,000 feet tall, able to withstand hurricane-force winds, will be built, forever changing the skyline of the tropical city.

High demand for South Florida real estate has continued since the pandemic began. Average Americans to financial moguls have been heading south, abandoning liberal-controlled metro areas in the Northeast and elsewhere that are imploding with out-of-control violent crime and high taxes.