After Teacher Shot By 6-Year-Old, Staff And Parents Blame Tolerance Of Violent Kids 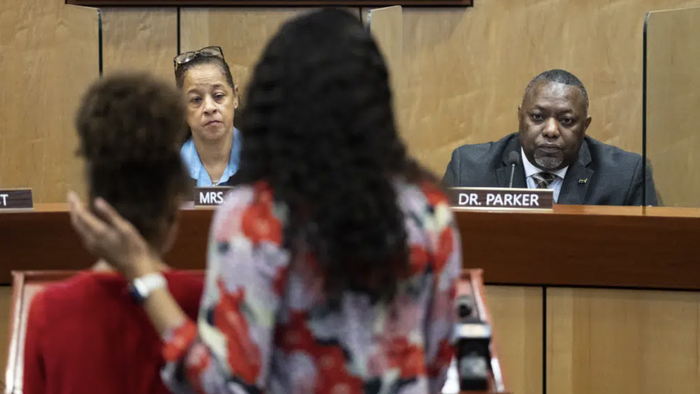 Shock over the shooting of a teacher by a 6-year-old in Newport News, Virginia has turned into anger, as both parents and staff say district officials tolerate violent students to bolster school ratings.

On Jan. 6, a first-grader fired a single pistol shot at his 24-year-old teacher, Abby Zwermer. A bullet passed through her hand and into her chest, sending her to a hospital with a life-threatening wound. Last week, school officials say a staff member searched the shooter’s backback earlier that morning — after someone tipped them to the possibility he was armed — but didn’t find the weapon.

Tuesday brought the first board meeting of Newport News Public Schools since the incident — and a stream of angry teachers and parents took to the podium to condemn a culture in which the pursuit of favorable district statistics means fostering an increasingly dangerous environment.

Former school psychologist Amber Thomas left the district after a 10-year career.  “A school counselor and I were often called to intervene with explosive behaviors, and the administrator would see what was going on and turn around and walk the other way,” Thomas told the board.

“We see students being assaulted (and) we see teachers being assaulted…daily,” said elementary teacher Djifa Lee. “[Disciplinary] referrals are so closely tied to accreditation, and this puts educators and office staff or administrators in a tough position.”

A former employee told WAVY that, on multiple occasions, she initiated disciplinary referrals, but administrators failed to schedule follow-up meetings with parents and teachers. She says peers had similar experiences.

“Every day in every one of our schools, teachers, students and other staff members are being hurt,” said high school librarian Nicole Cooke. “Every day, they’re hit. They’re bitten. They’re beaten. And [violent children] are allowed to stay so that our numbers look good.”

In a November board meeting, the district touted a 40% decline in disciplinary incidents and a 19% decrease in students being removed from instruction.

“Ask any teacher in this school division why discipline incidents decline, and I have a feeling the response will be the same: Infraction numbers are down because incidents are not always officially reported,” said Cindy Connell, a middle school teacher in the district.

Wary of officials’ focus on making the district’s statistics look better, Sarah Marchese, president of a high school Parent Teacher Student Association, asked for an external investigation of the disciplinary policies to be reviewed by an outside, impartial party.

“Our administrators are under an intense pressure to make everything appear better than it is in reality,” Connell told AP.

The incident was the third shooting in the district since September 2021. “Enough is enough. What will it take? I pray it is not a fourth shooting, because that blood will be on your hands,” said parent John Krikorian.