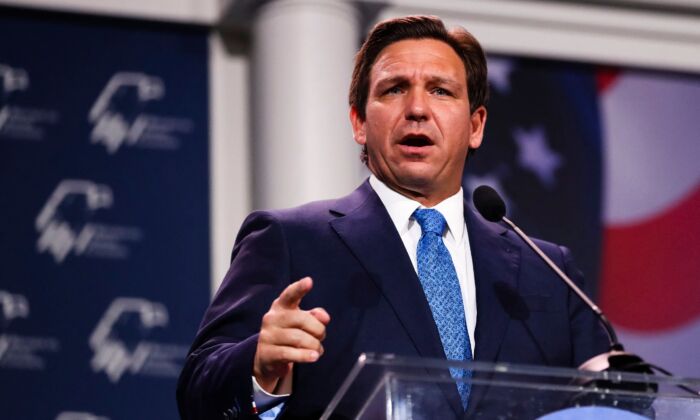 Amid intense and often chaotic protests in China over the regime’s authoritarian and punitive COVID-19 policies, California-based Apple Inc. is facing criticism for enforcing policies that make it harder for Chinese citizens to use certain Apple products to talk, text, and share content.

Florida’s Gov. Ron DeSantis, who recently won reelection in his home state by nearly 20 points in the midterm elections, told Fox News on Tuesday that the policy of limiting the use of Apple’s AirDrop app on iPhones in China plays right into the hands of the Chinese Communist Party (CCP) by making the protests less unified and less effective.

“If you look at what’s going on in China right now, the CCP have been imposing these zero-COVID lockdown policies. They’ve been doing it on and off for three years. And you have people in China that are really engaged in a noble effort to protest what is basically Leninist rule,” DeSantis said.

“So [Apple] are serving basically as a vassal to the Chinese Communist Party.”

DeSantis appears to have taken note of the suspicious timing of Apple’s Nov. 9 publication of a new version of its mobile operating system under the rubric of iOS 16.1.1. The update incorporated a change that affected only China-based users of the 9to5Mac, providing these users with just a 10-minute window in which to receive messages from others, where formerly a setting was available that allowed messages to come in from anybody for an indefinite amount of time. The imposition of this rule has obviously blunted protestors’ ability to coordinate and share highly time-sensitive information with one another about their own locations and activities, as well as those of security forces rounding up protesters.

DeSantis’s criticism of Apple for limiting the use of their content-sharing tool comes at one of the tensest moments of the long-running conflict between CCP officials and citizens throughout China, who chafe at the harsh restrictions on their movements and activities under the regime’s “zero-COVID” policy.

Reports emerged on Wednesday of chaotic scenes in the city of Guangzhou. Twitter videos have captured images of police in riot gear holding up shields to deflect debris hurled at them while advancing toward protestors, of people fleeing tear gas canisters, and of police carting away handcuffed demonstrators.

An Epoch Times report on Wednesday noted that one of the most outspoken protests against the regime’s harsh and bullying policies took place in Haizhu District mid-November, when more than a thousand residents turned out to demand more food and medical supplies. Over the past weekend, protests have raged across China as a consequence of a fire in Xinjiang province that killed a reported ten people who were unable to escape or receive timely help in part because of COVID-19 restrictions on their movements.