Are The FANG Stocks Dead? 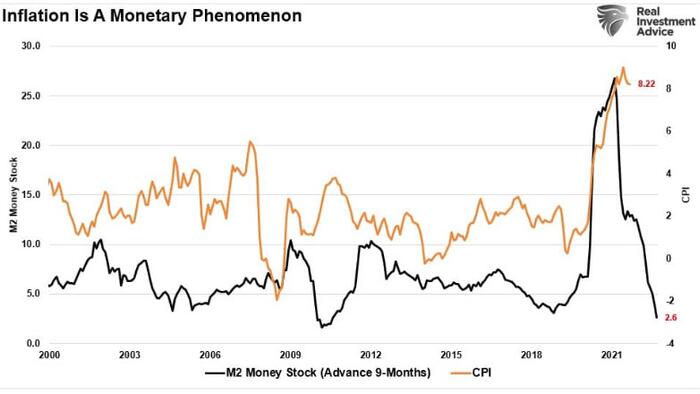 Authored by Lance Roberts via RealInvestmentAdvice.com,

Are the FANG stocks dead? Or, to be clear, are the MANNGMAT stocks dead? Of course, we are talking about the big technology heavyweights of Meta (FB), Apple (AAPL), Netflix (NFLX), Nvidia (NVDA), Google (GOOG), Microsoft (MSFT), Amazon (AMZN) and Tesla (TSLA). According to a recent article via the WSJ, such seems to be the case. To wit:

“Big technology stocks are in the midst of their biggest rout in more than a decade. Some investors, haunted by the 2000 dot-com bust, are bracing for bigger losses ahead.

Some investors say the decadelong era of tech dominance in markets is coming to an end.”

In the short-term, it certainly seems that value investors, after more than a decade of underperformance, are finally taking a victory lap as the long-awaited resurgence occurs. The value trade was something we wrote about extensively in 2020, as many believed “value investing was dead.”

“Such certainly seems to be the mantra as investors continue to pile into growth stocks while rationalizing valuations using methodologies that historically have not worked well.”

The chart below shows the annual performance difference between the Vanguard Value and Growth Index funds. The surge in value in 2022 is unsurprising as investors look for a “safe place” to hide as markets stumbled.

The brief periods of outperformance of value versus growth occurred during rough patches in the financial markets. However, as the following chart shows, there is a massive performance gap between value and growth.

Since 2008, much of that “gap” remains attributable to three primary factors – FANG stocks, buybacks, and passive investing.

We have previously discussed the impact of share buybacks on the overall market.

“The chart below via Pavilion Global Markets shows the impact stock buybacks have had on the market over the last decade. The decomposition of returns for the S&P 500 breaks down as follows:

In other words, in the absence of share repurchases, the stock market would not be pushing record highs of 4600 but instead levels closer to 2700.“

Of course, most of those “share buybacks” were concentrated in the largest market-capitalization stocks with the free cash flow, or borrowing capacity, to affect those transactions. For example, Apple Corp (AAPL) has repurchased more than $500 billion of its shares. But these buybacks occurred across the entirety of the FANG complex to help boost share prices higher.

Not surprisingly, with earnings under pressure due to higher interest rates, companies have announced a record of more than $1 Trillion in buybacks for this year.

Importantly, what these “buybacks” provide to FANG stocks is an “artificial buyer.” Therefore, when asset managers are looking for a “safe haven” to hold capital, the FANG stocks were the stocks of choice. Such was because they maintained a high level of liquidity, and the buybacks provided a ready buyer when needed. Such allowed asset managers to quickly move hundreds of millions of dollars in and out of positions without substantially impacting the price.

Investors should not readily dismiss the impact of share buybacks. As John Arthurs previously penned.

“For much of the last decade, companies buying their own shares have accounted for all net purchases. The total amount of stock bought back by companies since the 2008 crisis even exceeds the Federal Reserve’s spending on buying bonds over the same period as part of quantitative easing. Both pushed up asset prices.”

In other words, between the Federal Reserve injecting a massive amount of liquidity into the financial markets, and corporations buying back their shares, there have been effectively no other real buyers in the market.

However, another aspect of the FANG stocks remains vital to their future performance.

It’s A Function Of Passive

One of the problems with the financial markets currently is the illusion of performance. That illusion gets created by the largest market capitalization-weighted stocks. (Market capitalization is calculated by taking the price of a company multiplied by its number of shares outstanding.)

Notably, except for the Dow Jones Industrial Average, the major market indexes are weighted by market capitalization. Therefore, as a company’s stock price appreciates, it becomes a more significant index constituent. Such means that prices changes in the largest stocks have an outsized influence on the index.

You will recognize the names of the top-10 stocks in the index.”

Currently, roughly 2165 ETFs are trading in the U.S., with each of those ETFs owning many of the same underlying companies. For example, how many passive ETFs own the same stocks comprising the top 10 companies in the S&P 500? According to ETF.com:

In other words, out of roughly 2165 equity ETFs, the top-10 stocks in the index comprise approximately 20% of all issued ETFs. Such makes sense, given that for an ETF issuer to “sell” you a product, they need good performance. Moreover, in a late-stage market cycle driven by momentum, it is not uncommon to find the same “best-performing” stocks proliferating many ETFs.

One of the reasons that FANG stocks may not be “dead” going forward is the same reason they were the leaders in the past. Despite the market decline this year, investor capital flows are still headed into passive funds.

Of course, as investors buy shares of an ETF, the shares of all the underlying companies also get purchased. When the bearish market cycle reverses, the increase in flows into passive ETFs will push those FANG stocks higher along with the market.

Disinflation May Be The Catalyst

As we head into 2023, there is one final reason why FANG stocks will likely perform much better than many currently expect – “disinflation.”

In a disinflationary/deflationary environment, particularly in an economic recession, investors seek out companies with sustainable earnings growth rates. While many of the FANG stocks have come under pressure as of late due to “disappointing” earnings and forecasts, it is worth noting the earnings growth rates of these companies remain high over the next 3-5 years, according to Zacks Research:

You get the idea. The point here is that the impact of higher rates on economic growth will lead to a disinflationary environment. However, it isn’t just interest rates weighing on the economy but the extraction of the massive monetary injections over the last two years that fostered the inflationary surge. The reversal of the money supply, which leads the inflation measure by about nine months, suggests inflation will fall sharply next year.

As investors seek out investments with sustainable earnings growth rates in a slowing economic environment, many FANG stocks will garner their attention. Combine that focus with the inflows from passive investors when the market cycle turns, ongoing share buybacks, and the liquidity needs of major investors; likely, FANG stocks will still find some favor.

Does this mean they will perform as well as they have in the past? No. They could underperform other assets in a disinflationary environment, like bonds, where yields fall sharply.

The point is that investors should not dismiss FANG stocks entirely because the media says they are “dead.” It is worth remembering many said the same about Energy stocks in late 2020. Of course, that was just before that “dead asset” outperformed everything else in the market.