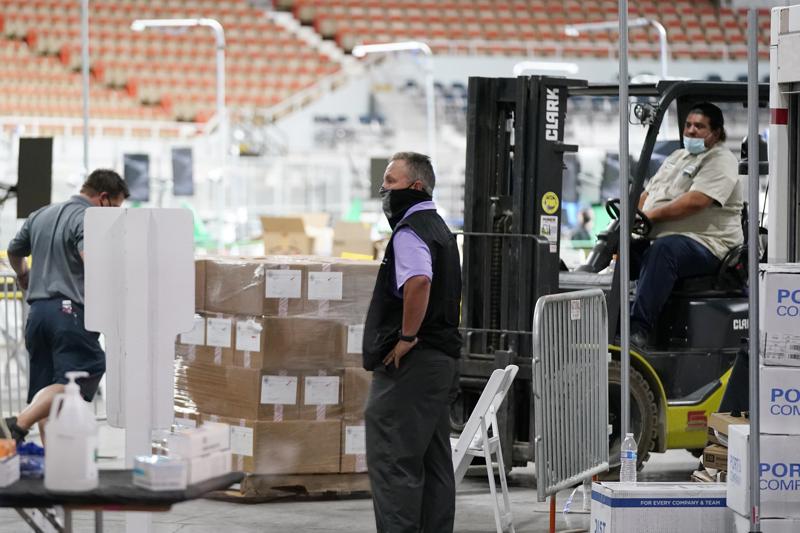 Some of the 2.1 million ballots cast during the 2020 election, are brought in for recounting at a 2020 election ballot audit ordered by the Republican lead Arizona Senate at the Arizona Veterans Memorial Coliseum, during a news conference Thursday, April 22, 2021, in Phoenix. (AP Photo/Ross D. Franklin)

Election audits for the 2020 U.S. election are moving forward despite continued attempts by Democrats to derail the process.

“Overnight we went from 20 counting locations on the floor to 46,” stated former Arizona secretary of state and audit director Ken Bennett. “Hopefully in the next day or two, they will be ready to fully staff that and then if we go to three shifts, which we are talking about, we will almost triple our throughput.”

During an interview Sunday, Bennett said he will not share any information about their findings… the audit is complete. He added, keeping the data and information secure is the main priority as the audit advances.

They are currently counting the ballots and evaluating them for irregularities such as folds or being marked with a Xerox machine as opposed to pen.

Bennett said despite mainstream media journalists attempting to intimidate poll workers by taking photos of their license plates, they are not stopping the hand recount until it’s complete.

Meanwhile, another election audit is underway in a small New Hampshire town. State officials are struggling to choose a contractor to perform the election audit following the stunning revelations of so-called “Windham incident.”

Selectman Bruce Breton said the state’s decision to appoint Mark Lindeman as chief election auditor is dangerous because Lindeman has already criticized a similar audit in Arizona. Instead, Breton is supporting the candidacy of Jovan Pulitzer who’s been vocal about election fraud.

The local government of Windham are set to meet on Monday night and will discuss the vote for the auditor. As leftists on the Windham committee are expected to stick with their vote of Lindeman, Breton is encouraging residents to get involved and attend the meeting.