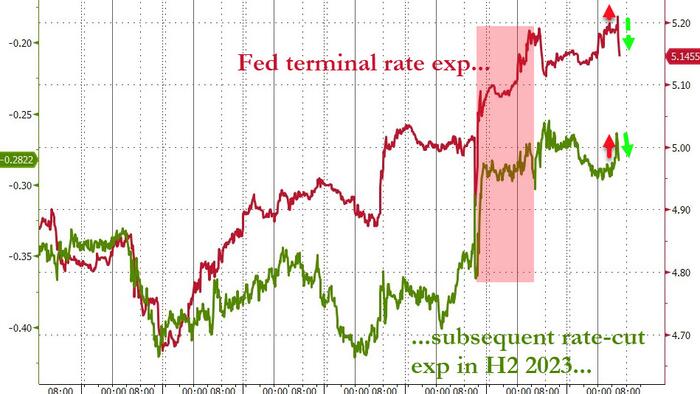 “…the jobs report for October sends mixed signals about the labor market, with one survey showing robust job gains while another shows a big jump in unemployment.

Filtering the noise in the data, our takeaway is that the labor market is still very tight and much adjustment still needs to occur before unemployment is close to a neutral level.

We expect that the Fed will ultimately have to raise rates to 5% next year.”

So what to do?

Since it is difficult to describe things as good or bad in this topsy turvy world, let’s look at it from the perspective of:

Should be baked in:

Jobs continue to be the highlight of all economic and corporate data we receive (unless you look at the Household data).

That is not surprising given the difficulty companies had filling jobs. Job is all likelihood, given the experiences of the past two years, will be the LAST shoe to drop in any economic weakness.

Probably a touch more impetus to see more hawkish Fed than not, but with so much changing between 2:30 pm on Wednesday and now, it probably isn’t enough to move the needle significantly.

I’ve given up trying to understand why the Household data continues to be so different than the Establishment (2.5 million jobs since March 31, versus 0.5 million) as it doesn’t seem to register with anyone (other than it is what is used to calculate the unemployment rate).

Putting that all together, initially rate-trajectory expectations rose hawkishly (terminal rate jumped above 5.20% with rate-cut expectations falling), but that quickyl reversed with a dovish shift…

Across the rest of the asset-classes, after some initial confusion, everyone is buying everything now…

Gold and crypto are flying higher…

As the only thing down is the dollar…

Let’s see how this all look in a few hours.