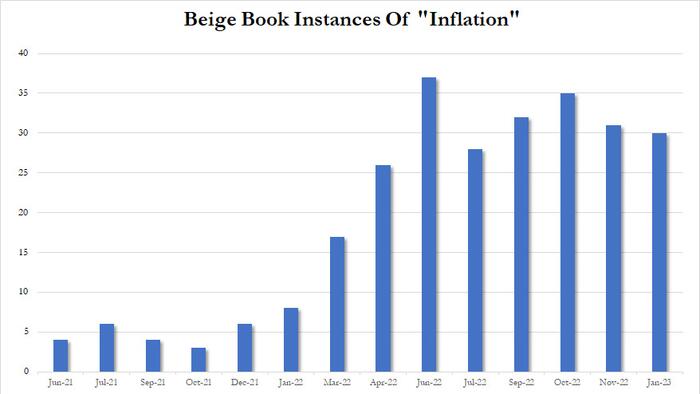 There wasn’t too much excitement in the latest Fed Beige Book report which was based on information collected on or before January 9, 2023: it found that overall economic activity was relatively unchanged since the previous, Nov 30, 2022 report: five Districts reported slight or modest increases in overall activity, six noted no change or slight declines, and one cited a significant decline. Looking ahead, there wasn’t much excitement (or hope) either, with contacts expecting “little growth in the months ahead.”

That said, if one reads the components of the report, one doesn’t get the impression that the economy was “relatively unchanged” – if anything, it sounds like the economy is sliding into a recession, especially for the low and moderate-income households:

Turning to labor markets we find a far stronger underlying picture, although one wonders how much of this is still a kneejerk response to the chaos in the immediate aftermath of the covid lockdowns:

There was better news when looking at inflation: here the Beige book found that selling prices increased at a modest or moderate pace in most Districts, though many said that the pace of increases had slowed from that of recent reporting periods.

Two charts to end with: first, peak inflation is now comfortably in the rearview mirror…

… although the risk of stagflation remains with mentions of “slow” sticky near record highs.