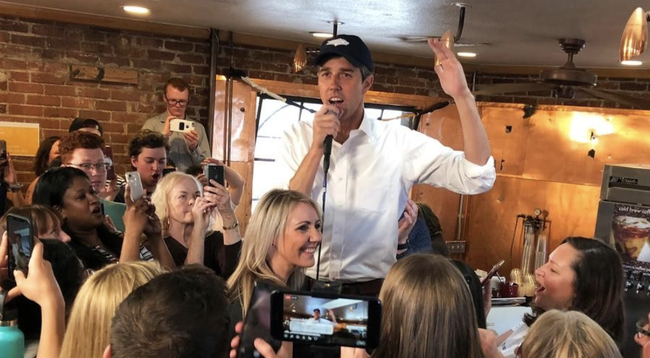 Beto O’Rourke has a solution to the problem of chronic poor nutrition in impoverished communities that is as tone deaf as it is hilarious.

During a Friday event hosted by the Nevada State Democratic Party at a local brewery in Henderson, a city outside of Las Vegas, the former Congressman called for the establishment of farm-to-table restaurants in every community to combat poor nutrition, according to the Washington Examiner.

Beto says he wants farm to table restaurants in *every* community when asked about poor nutrition in many places.

For those who aren’t familiar with the ‘farm-to-table’ movement, it can best be summed up as a pretentious ‘sustainable’ ‘health-conscious’ movement currently in vogue among wealthy urbanites. It involves serving meals using ingredients directly sourced from small sustainable farms. These meals are typically sold at outrageous prices.

As far as we know, most farm-to-table restaurants don’t accept payment in food stamps.

Political reporters at the event couldn’t help but laugh about the comment.

A free range, local chicken in every pot (with seasonal vegetables) https://t.co/EAsLCgFjdI

For context, the question that O’Rourke was attempting to answer involved how the federal farm bill could better address the problem of ‘food deserts’, that is, communities that lack supermarkets or grocery stores where fresh produce and other healthy foods can be purchased.

The gaffe comes as O’Rourke – formerly among the three frontrunners in early polling ahead of next year’s Iowa Caucus – has seen his support wane as the media has moved on to its new presidential-it-boy-of-the-moment, South Bend, Indiana Mayor Pete Buttigieg.

In a recent national poll of likely Democratic voters, O’Rourke came in fifth overall, behind Buttigieg and Kamala Harris.

The slide for O’Rourke has also been fueled by reports about how his wealthy father-in-law helped launch is political career, as well as lingering resentment from feminists about a remark made by O’Rourke during his campaign launch about how his wife, Amy, handles most of the child-care duties for the couple.