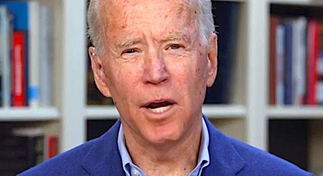 Responding to the mother of a “transgender daughter” at the ABC News townhall Thursday night, Joe Biden vowed to eliminate any executive orders that “discriminate” against transgendered people and promised to make it possible for young children to change their gender.

The question came from Mieke Haeck, who described being the “proud mom” of two girls, 8 and 10.

“My youngest daughter is transgender,” she said.

She charged that the Trump administration has “attacked” transgenders by banning them from the military and more.

She asked Biden what he would do.

“I will flatout just change the law, eliminate those executive orders, number one,” the Democratic presidential nominee said.

He then told a personal story about applying for a job as a lifeguard, seeing two men kiss and hearing his father explain it’s because “they love each other.”

“The idea that an 8-year-old child or a 10-year-old child the size, you know I decided I want to be transgender that’s what I think I’d like to be, make make my life a lot easier. There should be zero discrimination,” Biden said.

“What’s happening is too many changender (sic) women of color are being murdered. They’re being murdered. I mean I think it’s up to 17, don’t hold me to that number … it’s, it’s, it’s higher now. That’s just this year,” he said. “I promise you there is no reason to suggest that there should be any right denied your daughter, or daughters, whichever, one or two, one, your daughter, that your other daughter has a right to be and do. None, zero.”

USA Today last month assembled a list of cases through which transgender activists and others are using a recent Supreme Court decision to establish special rights.

Alito charged that the majority in the Bostock decision exceeded its role as the interpreter of the Constitution.

“There is only one word for what the court has done today: legislation,” he wrote.

He pointed out that the body responsible for legislation, the Congress, has proposed such measures but they have failed.

“The document that the court releases is in the form of a judicial opinion interpreting a statute, but that is deceptive,” he wrote. “Title VII of the Civil Rights Act of 1964 prohibits employment discrimination on any of five specified grounds: ‘race, color, religion, sex, [and] national origin.’ … Neither ‘sexual orientation nor ‘gender identity’ appears on that list. For the past 45 years, bills have been introduced in Congress to add ‘sexual orientation’ to the list, and in recent years, bill have included ‘gender identity’ as well. But to date, none has passed.”

He also warned the decision was guaranteed to “have far-reaching consequences.”

“We will not be able to avoid those issues for long,” Alito said. “The entire federal judiciary will be mired for years in disputes about the reach of the court’s reasoning.”

For example, the 4th U.S. Circuit Court of Appeals ruled a high school student in Virginia can choose which restroom to use.

It was the fourth in a series of such decisions, all citing the Bostock ruling.

One remaining hurdle is the constitutional protection for religious rights. Many religious groups are bound by their beliefs to not endorse alternative sexual lifestyles, and the courts so far have not undermined their First Amendment protection.

The issue has arisen in a case to be heard in a few months in which a Catholic social services agency that has served Philadelphia’s foster care program for decades is opposing the city’s demand that it place children with same-sex couples.

The high court opinion was limited to employment discrimination, with Justice Neil Gorsuch writing, “We do not purport to address bathrooms, locker rooms, or anything else of the kind.”

But Alito pointed out that 167 federal laws could be affected by the ruling.

The high court had been warned of some of the consequences of the decision in a brief from people who have experienced gender dysphoria.

“Differences exist between males and females at conception at the biochemical and cellular levels, and result directly from the defining genotypic difference between male and female mammals. An XY (male) sex chromosome constitution versus an XX (female) sex chromosome constitution. Every cell of a male is male, and every cell of a female is female,” the court record said.

Researchers who conducted the world’s largest study of patients who have undergone sex-reassignment announced last year to much fanfare their conclusion that the surgery reduced the need for mental health treatment.

But now the editors of the American Journal of Psychiatry and the authors of the October 2019 paper issued a startling correction, wrote Ryan T. Anderson, a senior research fellow at the Heritage Foundation.

After a barrage of criticism of their study, the researchers now find “the results demonstrated no advantage of surgery in relation to subsequent mood or anxiety disorder-related health care.”

No only did the largest dataset on sex-reassignment procedures reveal that such procedures do not bring the promised mental health benefits, it showed patients who had sex-reassignment surgeries did worse in their treatment for anxiety disorders than those who did not.

The study is titled “Reduction in Mental Health Treatment Utilization Among Transgender Individuals After Gender-Affirming Surgeries: A Total Population Study.”