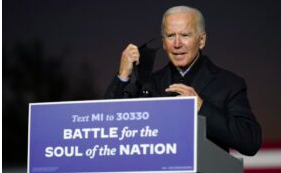 Yes, you read that correctly.

Based on The Washington Times reporting, DHSS Alejandro Mayorkas said the administration is teasing the idea of patching up the gaps at the border.

“The president has communicated quite clearly his decision that the emergency that triggered the devotion of DOD funds to the construction of the border wall is ended,” he claimed.

While the administration’s “admission” on the matter isn’t anywhere near official, it’s one of the very few acknowledgments by the Biden administration that the border crisis has gotten out of control.

The public is increasingly unhappy with Biden’s handling of the border.

A poll conducted by the Senate Opportunity Fund shows that 53 percent of Americans surveyed were in favor of resumed border wall construction.

Biden, of course, made it his day one mission to add “not another foot” to the Trump wall…

In our #nabjnahj2020 interview, @JoeBiden promised that 'not another foot of wall would be constructed" on the border. Watch our exchange: pic.twitter.com/rM9OgsYicU

Well, here we are, a border crisis in that has barely spanned four months and Biden looks ready to ditch his promises.