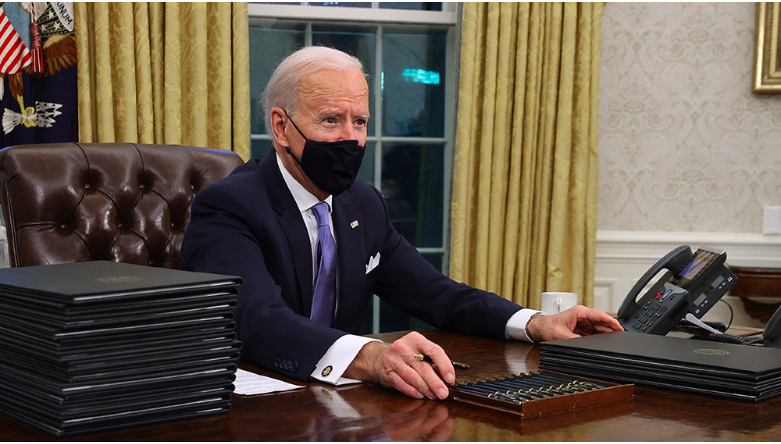 Deceptively named the “Executive Order on Protecting Public Health and the Environment and Restoring Science to Tackle the Climate Crisis,” Joe Biden’s order undoing Trump’s brings the United States one step closer to total absorption into the global system of technocratic authoritarianism.

Thanks to China Joe, Beijing now has direct access to a key piece of American national security infrastructure, and all under the guise of combating the ever-present boogeyman known as “climate change,” with “public health” and “science” also thrown in for good measure.

Under Trump, Chinese interference with American infrastructure was on the chopping block. Trump had actively sought to ban, replace and set new criteria for bulk power system (BPS) electrical equipment coming from foreign countries, meaning Chinese equipment with possible hidden backdoors would not have been allowed in the United States.

“The bulk-power system is a target of those seeking to commit malicious acts against the United States and its people, including malicious cyber activities, because a successful attack on our bulk-power system would present significant risks to our economy, human health and safety, and would render the United States less capable of acting in defense of itself and its allies.”

Joe and Hunter Biden are domestic terrorists and enemies of America

Trump’s EO went on to delineate that foreign countries and nationals thereof are – or were now that the Biden regime is pulling the strings – prohibited from acquiring, importing, transferring, or installing any BPS equipment in the U.S. To allow otherwise would put the country at needless risk of a cyberattack or other malicious invasion.

Any existing BPS equipment deemed to be in violation of the aforementioned guidelines was slated to be identified, isolated, monitored or replaced, as appropriate – but not under Biden.

No, the Chinese puppet currently occupying the White House is more than fine with allowing his masters to gain a foothold into America’s energy infrastructure. Expect rolling blackouts, utility warfare and a possible EMP (electromagnetic pulse) attack under Biden.

Just four days prior to the Biden regime taking over, then-Secretary of Energy Dan Brouillette issued a “prohibition order designed to reduce the risks that entities associated with the People’s Republic of China pose to the Nation’s BPS.”

“The order prohibits utilities that supply critical defense facilities (CDF) from procuring from the People’s Republic of China, specific BPS electric equipment that poses an undue risk to the BPS, the security or resilience of critical infrastructure, the economy, national security, or safety and security of Americans,” a press release added.

Biden’s EO undoes this directive, suspending Trump’s for at least 90 days. Biden has also ordered the new Secretary of Energy and Director of OMB to jointly consider “whether to recommend that a replacement order be issued.”

The fate of America’s BPS, in other words, is now in the hands of Biden’s hired lackeys, who almost certainly are working in the best interests of communist China rather than the U.S.

It all makes sense when considering that Hunter funneled millions of dollars into China General Nuclear Power Corp., a state-owned power company that was found to be guilty of stealing American nuclear technology for the Chinese Communist Party (CCP). This was all arranged after Hunter’s dad departed from the White House back in 2017.

More news stories about Sleepy Joe’s treasonous actions against the United States can be found at Treason.news.

Sources for this article include: