Biden Reacts to Rittenhouse Verdict: ‘Jury System Works and We Have to Abide by It’ 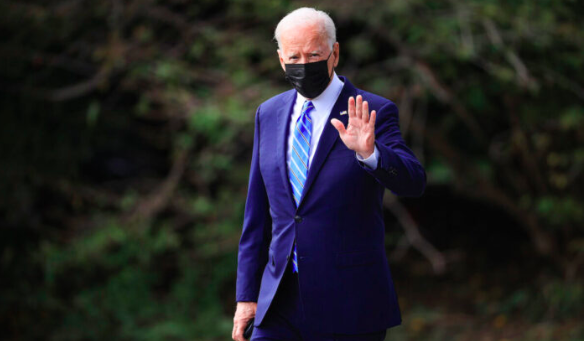 President Joe Biden said he stands by the jury’s decision Friday to declare Kyle Rittenhouse not guilty on all five charges filed against him.

After returning home from a routine medical examination at Walter Reed Hospital in Maryland, Biden told reporters that he didn’t watch the trial.

“Look, I stand by what the jury has concluded,” Biden said in response to a question about his comments last year about the Rittenhouse case. “The jury system works and we have to abide by it.”

Biden later issued a lengthy statement saying that was also “angry and concerned” by the verdict but called for calm because “the jury has spoken.”

“I urge everyone to express their views peacefully, consistent with the rule of law,” Biden continued.

Rittenhouse, 18, was acquitted by a jury panel of seven women and five men in the shooting deaths of two individuals and for wounding another during a night of protests, riots, and violence in Kenosha, Wisconsin, on Aug. 25, 2020. Rittenhouse claimed self-defense, an assertion that was largely corroborated by video footage of the shootings.

As the jury was reading the verdict earlier Friday, White House press secretary Jen Psaki said that the administration is in communication with local law enforcement agencies amid potential unrest after the verdict. Outside the Kenosha Courthouse on Friday, some protesters chanted left-wing slogans against the U.S. criminal justice system.

Last week, Rittenhouse’s mother, Wendy, told media outlets that the president, who was then a candidate, defamed her son last year with a Twitter post suggesting Rittenhouse was a white supremacist.

“He’s not a white supremacist. He’s not a racist,” Wendy Rittenhouse told Fox News. “When I saw that, I was shocked, I was angry,” she said of Biden’s Twitter post.

Wisconsin Gov. Tony Evers, a Democrat, urged for calm on Friday after the incident.

“No verdict will be able to bring back the lives of Anthony Huber and Joseph Rosenbaum, or heal Gaige Grosskreutz’s injuries, just as no verdict can heal the wounds or trauma experienced by Jacob Blake and his family,” he said in a statement. “No ruling today changes our reality in Wisconsin that we have work to do toward equity, accountability, and justice that communities across our state are demanding and deserve.”

Evers encouraged “any efforts or actions aimed at sowing division are unwelcome in our state as they will only hinder that healing.”

Rittenhouse was charged with homicide, attempted homicide, and reckless endangering for killing two men and wounding a third with an AR-style firearm in the summer of 2020 during a tumultuous night of riots and arson attacks in Kenosha. Rittenhouse, who said he was training to be a firefighter EMT, said he acted in self-defense and went to Kenosha to protect property from rioters and arsonists.

His self-defense claim was mostly corroborated by video footage of the incident.

For the most serious charge, Rittenhouse could have gotten life in prison if found guilty. The two other charges carried sentences of more than 60 years behind bars each.

Family spokesman David Hancock told reporters outside the courthouse that Rittenhouse plans to study nursing when he gets to college.

“I think you’re going to see some good things that come out of Kyle in the future,” Hancock said. “He’s a very, very pragmatic young man who’s been through a lot.” He continued: “He is innocent and he can live a free life now. There are no winners in this.”