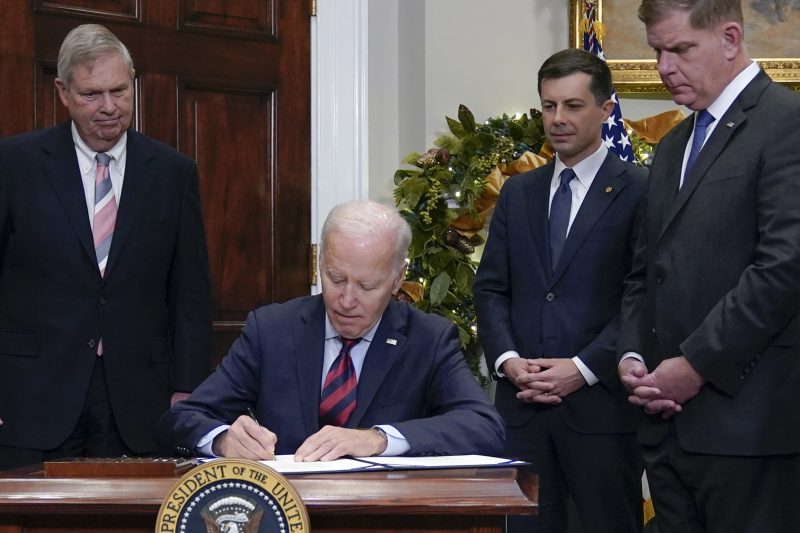 President Biden has ended the potential rail strike by signing a joint resolution. The resolution makes the nationwide railroad strike, which would have likely annihilated the American economy, illegal.

On Friday, the president claimed the bill avoided ‘an economic catastrophe.’

“The bill I’m about to sign ends a difficult rail dispute and helps our nation avoid what – without a doubt – would have been an economic catastrophe at a very bad time in the calendar,” he said.

The bill was passed by a Senate vote of 80 to 15 on Thursday. This came just days before the strike was due to begin on December 9th.The legislation will impose the tentative contract deal which was reached back in September on a dozen unions representing 115,000 workers.

Biden called on Congress to impose the tentative agreement reached in September, a power Congress holds and has used in the past to avoid both rail and airline strikes. The president defended the contract noting the significant wage increases.

However, 4 of the 12 unions rejected the rail deal and criticized Biden over its lack of paid sick leave, a provision he says he will continue to fight for. Currently, conductors and engineers can be on-call for 14 consecutive days without break and do not receive a single sick day, paid or unpaid.

The intervention to pass the legislation was perplexing for Democrat lawmakers who traditionally align themselves with the influential labor unions who also criticized Biden’s move to intervene.

Retired railway engineer and union member for 40 years, Jeff Kurtz, recently spoke to the Associated Press about the rail settlement. He called it a ‘disaster.’ Kurtz blamed the administration’s own practices for affecting the supply chains, not the rail workers. He went on to say that Democrats have been controlling the railroads for years and that the strike was only brought about due to their own actions. He stated that Biden is hypocritical for calling himself the ‘most pro-labor president ever.’

However, just hours after walking out, then President Ronald Reagan invoked the anti-strike Taft-Hartley Act to fire the controllers if they did not return to work in two days. In comparison to the current situation, PATCO serves as a historical example of anti-labor legislation now being repeated by Joint Resolution 100.

At the end of the day, while rail workers were denied the right to strike, the new legislation offers better pay and improved working conditions, a small step in the right direction. Railroad strikes have played a significant role in the history of the U.S. and we can be certain this will not be the last one.