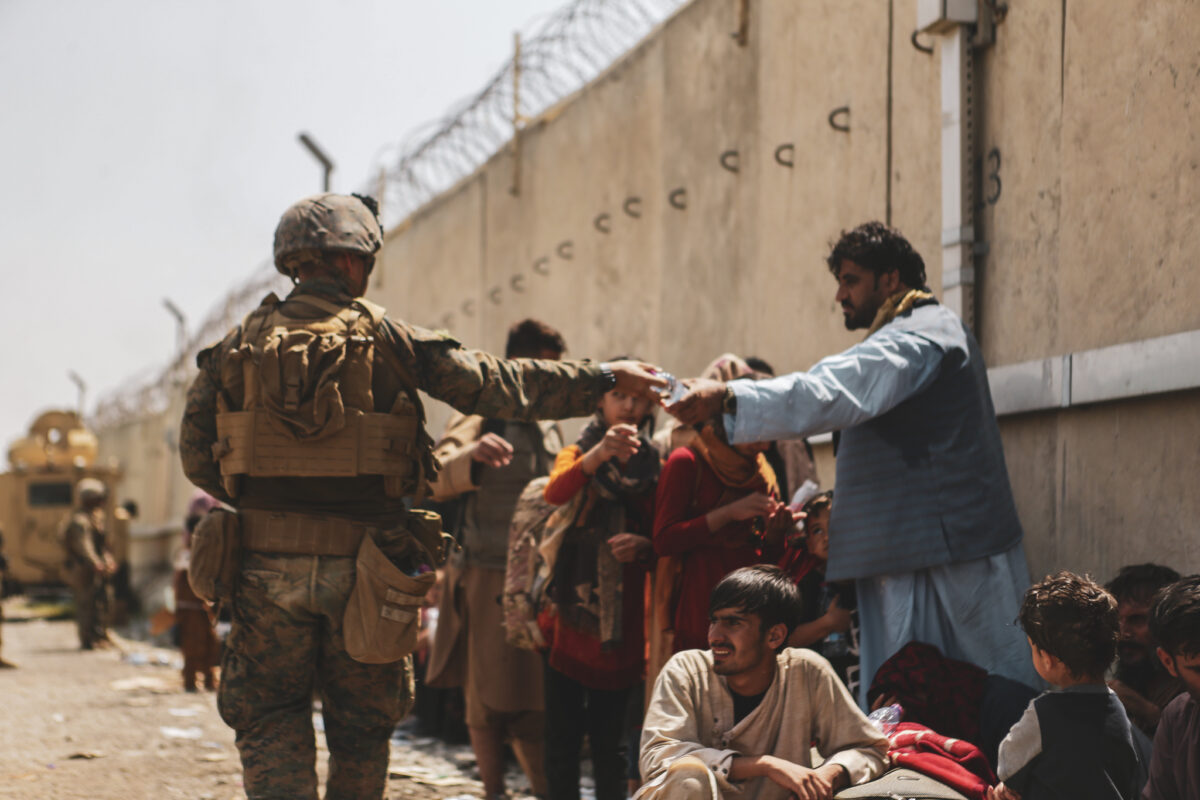 The Chinese regime eagerly made use of President Joe Biden’s chaotic pullout from Afghanistan in August 2021 to sow seeds of doubt among U.S. allies about the United States’ strategic leadership and global influence, a new Department of Defense (DoD) report has revealed.

According to the report, this ploy came in the midst of Chinese efforts to carry out an aggressively expansionist foreign policy, vying to position itself for economic domination over its Asian rivals and a possible showdown with Taiwan, the self-ruled island the communist regime claims as its own.

The DoD’s annual report, titled “Military and Security Developments Involving the People’s Republic of China 2022,” recounts that Chinese officials sharply criticized the hasty and tense U.S. pullout from Afghanistan. They pointed to the withdrawal as evidence that America is “an unreliable partner and declining power,” the report stated.

According to the report, this contention by Chinese regime officials was no idle sniping but was part of a carefully conceived effort to make U.S. strategic partners wonder about the viability of their relationship with Washington.

These tools, in the report’s telling, also included a tendency to blame the United States publicly for rising tensions between Washington and Beijing, and to attribute such tensions to U.S. miscalculations about Chinese goals and objectives domestically and on the world stage.

But the U.S. stance toward China is not based on paranoia or alarmism, the report states. It goes to some lengths to illustrate the strategic context of Beijing’s rhetoric, citing the Chinese Communist Party’s (CCP) recent 20th National Congress, and drawing extensively on a report drafted by CCP officials on those proceedings, to provide evidence about Beijing’s strategies, tactics, aims, and objectives, particularly with regard to the enhancement of People’s Liberation Army (PLA) technology, equipment, capabilities, and reach.

“The 20th Party Congress report focused on intensifying and accelerating the PLA’s modernization goals over the next five years, including strengthening its ‘system of strategic deterrence,’” the DoD report stated.

The report warned about the Chinese regime’s strategy of Military-Civil Fusion (MCF), which harnesses China’s civilian technological expertise and resources for military purposes. It argued that Beijing’s agenda will grow bolder in the coming years and continue to threaten regional stability if the regime is able to implement MCF goals.

The regime pursues MCF under the auspices of its Central Commission for Military Civilian Fusion Development (CCMCFD), formed in 2017 and led by leader Xi Jinping, Premier Li Keqiang, other members of the Politburo Standing Committee, and lesser officials at various levels of the regime.

While strategic deterrence may sound like a passive goal, aimed more at protecting China and Chinese interests from foreign aggressors than advancing a nationalist and expansionist agenda impinging on others’ sovereignty, the DoD’s report leaves little doubt as to the reality behind this mantra.

The report detailed the territorial designs that Beijing is likely to pursue with even greater determination in the South China Sea, home of shipping lanes supplying more than 80 percent of the crude oil to South Korea, Japan, and Taiwan. Beijing’s advancement of its claims to an ill-defined “nine-dash line,” the report stated, has set the communist regime directly at odds with Vietnam, Malaysia, Brunei, and the Philippines, while Taiwan has sought doggedly to defend its possession of Itu Aba Island in the Spratly Islands from the regime’s claims.

The report noted that, in the furtherance of its expansionist agenda, the Chinese regime in April 2021 formed two new administrative districts encompassing the Paracel Islands and the Spratly Islands and asserted claims to no fewer than 80 geographical points in the region. Beijing also lays claim to an “exclusive economic zone” in the area, denying access to military forces from other countries.

The most salient feature of the MCF agenda is the harnessing of technology hitherto belonging to civilian entities for explicitly militaristic purposes.

As described in the DoD report, this involves a number of interrelated efforts including the fusing of civilian technology and industrial capabilities with the defense sector, adapting scientific initiatives and breakthroughs for military purposes, imposing military requirements on civilian organizations and workers, expanding the military’s ability to draft individuals into its service as it deems fit, among other efforts and initiatives.

In all instances, the definition of national security, deterrence, and legitimate foreign policy goals are wholly at the discretion of CCP leaders, according to the report.

“[China] pursues its Military-Civil Fusion (MCF) development strategy as a nationwide endeavor that seeks to meld its economic and social development strategies with its security strategies to build an integrated national strategic system and capabilities in support of China’s national rejuvenation goals,” the report stated.