Biden’s debate stumble: He raises issue of corruption allegations himself 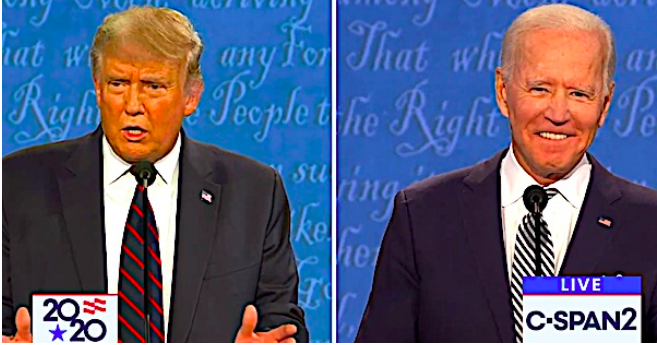 Democratic presidential nominee Joe Biden, during Thursday’s debate with President Donald Trump, hesitated about it, but then said he was going to go ahead. And he did.

He himself raised the issue that Trump lawyer Rudy Giuliani was being used as an “agent” of Russia to spread disinformation.

That, of course, was the opening for which the president was waiting, to ask Biden about the millions of dollars his family was getting from Russia, from China, and more. And what about the money that was being held for the “big guy,” identified as Joe Biden?

The issue has erupted into what some analysts have described as the biggest scandal ever in American politics, as emails and other documentation that have become available – from insiders, from an abandoned computer, and more – have described how the Biden family was making multiple deals with foreign interests that would benefit the family with millions of dollars.

“I think you owe an explanation to the American people,” the president charged. “Maybe you can do it now.”

Trump described the Biden family as a “vacuum cleaner,” sucking up money from everyone.

Biden also denied there was anything wrong with his son, Hunter, getting paid tens of thousands of dollars a month from Burisma, a Ukrainian gas company, an industry in which Hunter had no experience.

That deal was made while Joe Biden was vice president for Barack Obama’s administration and responsible for Ukraine policy. Even at the time, there were concerns raised because of the appearance of a conflict of interest since Burisma, reportedly corrupt, was under investigation and Joe Biden infamously demanded of Ukrainians that the prosecutor be fired. He threatened to withhold American aid if that did not happen.

See video of Joe Biden recalling how he successfully pressured Ukrainian officials to fire the prosecutor who was targeting Burisma:

Trump’s campaign pointed out the facts: that Hunter Biden’s firm got $3.5 million from Russian billionaire Elena Baturina, the wife of the former mayor of Moscow; that Hunter Biden also opened a joint bank account with a Chinese national linked to the Communist government, and while “Joe Biden advocated for legislation favored by big banks that made it harder for struggling Americans to declare bankruptcy, Biden’s son Hunter was ‘earning’ hundreds of thousands of dollars in ‘consultant fees’ from one of those banks, MBNA.”

The campaign released a long list of additional conflict-of-interest concerns involving Biden and his family members.

“While Biden was vice president, his son Hunter joined him on Air Force Two for a trip to China. While in Beijing he arranged for his Chinese business partner to meet his father. Ten days after the trip, Hunter’s firm received an approval from the Chinese government-owned Bank of China that paved the way for more than a billion dollars in business for Hunter’s firm,” the report said.

Late in the debate, Trump caught Biden trying to dismiss the scandals involving himself, his son, his brother, and others as a hoax.

“The laptop is another Russia hoax?” Trump questioned. “Russia, Russia, Russia.” He was citing the fact that the Obama administration used information that likely was provided by Russia to deceive a federal court and get permission to spy on Trump’s 2016 campaign, claiming it colluded with Russia.

The first question of the debate was on coronavirus.

President Trump explained how his efforts had taken an estimate of well over two million deaths expected in the United States and limited that to about 220,000 so far.

He pointed out it is a worldwide pandemic, triggered by the virus that came out of China.

The president said U.S. efforts have been successful in keeping U.S. results better than many other nations.

Biden blamed Trump personally for the American deaths, charging, “Anyone who is responsible for that many deaths should not remain president of the United States.”

He did not explain how the president would be considered personally responsible for the deaths caused by a worldwide pandemic.

He also did not explain how he would have done things differently.

Trump made the point that Biden has called him “xenophobic” for closing down travel from China when he did.

Biden claimed going forward, he would shut down the virus, but not the country. He didn’t explain. He did confirm he supported closing down parts of the economy.

Trump pointed out Democrat governors are the ones who have closed down economies, hurting businesses and residents alike.

The debate was at Belmont University in Nashville, and was moderated by NBC’s Kristen Welker, who has been accused by the president of being biased against him. It was not disorganized, like the first, at which moderator Chris Wallace completely lost control, and the candidates spoke over each other, and him.

The debate came at a time in America political life that former House Speaker Newt Gingrich described as being like none other. Ever.

He cited multiple scandals, including the “corrupt Biden family,” how the Biden campaign and media have colluded to hide that, and the scandal of Facebook and Twitter censoring the nation on the topic of the Biden scandals.

Gingrich noted there’s evidence that Biden was paid $911,000 from an institute at the University of Pennsylvania that was funded by China.

“Does this mean the vice president was on the Chinese communist payroll between leaving office and running for president?” Gingrich asked.

The debate was expected to impact the ballot decisions of only a few Americans. Estimates are that 43 million already had voted before the debate. Many, many others, however, had made up their minds.

The Washington Examiner revealed that one of Hunter Biden’s former business partners revealed a web of foreign figures, “all of whom trade off access to the former vice president or off the Biden family name.”

Hundreds of files were given to the Washington Examiner and they detailed many of the proposed deals included “unique benefits” of working with the Bidens.

The Biden campaign has blamed – preemptively – all the issues on “Russian disinformation.”

That’s despite top American intel officials saying there’s no evidence of that.

The campaign, critically, has not denied the authenticity of the emails on which the accusations are based.

“One email included in the trove, sent to the younger Biden on May 13, 2017, after his father had left office, contained details of ‘remuneration packages’ for a deal with a Chinese energy company, including “10 held by H for the big guy” — which many interpreted as referring to shares held by Hunter Biden for his father, Joe,” the report said.

That the media has taken a side was clear in the dispute created by Lesley Stahl of “60 Minutes” who interviewed both the president and vice-president. They posted full copies of their interviews, showing Stahl was argumentative and demanding.

She claimed the two “insulted” her network.

The debate was scheduled to be on foreign policy, but the Presidential Debate Commission abruptly changed that to a variety of topics just days ago.