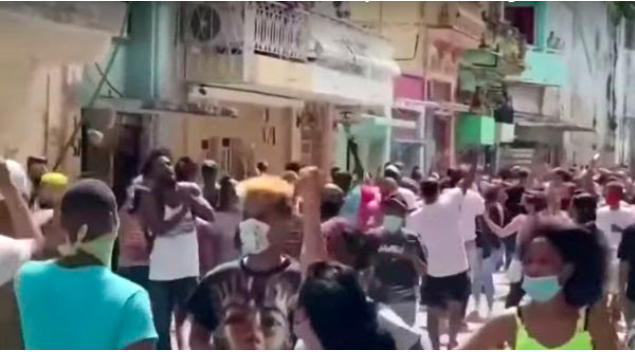 Black Lives Matter, which was founded by self-described “trained Marxists, blamed the U.S. for Cuba’s economic woes and the current unrest while commending the communist régime for granting asylum to “black revolutionaries” such as convicted fugitive cop-killer Assata Shakur.

Employing the decades-old narrative of Cuban propaganda, BLM issued a statement on Instagram Wednesday condemning the 1962 U.S. embargo, asserting the U.S. implemented it with the intent to “undermine the right of Cubans to choose their own government.”

“Black Lives Matter condemns the U.S. federal government’s inhumane treatment of Cubans and urges it to immediately lift the economic embargo,” the group wrote. “This cruel and inhumane policy, instituted with the explicit intention of destabilizing the country and undermining Cubans’ right to choose their own government, is at the heart of Cuba’s current crisis.”

Disgusting! Despite the Cuban dictatorship’s murdering and beating of protestors (many of them Black), BLM’s statement on Cuba….condemns the US, praises the Castro regime, and makes no mention of the atrocities being committed by the dictatorship. #SOSCuba #PatriaYVida https://t.co/a9k64eYCcQ

Over the weekend, protesters took to the streets across Cuba waving American flags, and shouting “freedom” and “down with the dictatorship” in the biggest public demonstrations in nearly three decades

BLM praised the communist régime for its “solidarity with oppressed peoples of African descent,” including “protecting black revolutionaries” like Shakur.

Shakur, also known as JoAnne Chesimard, was a member of the Black Liberation Army who escaped from prison in 1979 while serving a life sentence for the execution-style murder of New Jersey state trooper Werner Foerster. Fidel Castro granted her asylum amid a $2 million reward for her capture.

“The extortionist ring known as the Black Lives Matter organization took a break today from shaking down corporations for millions & buying themselves mansions to share their support for the Communist régime in #Cuba,” he wrote on Twitter.

In an interview with Fox News on Thursday, Rubio said it’s the communist régime that has an embargo against its people. He argued the government bars people from owning their own businesses, and “nothing prevents us from doing business with people.”

He said the fact that BLM would support someone who murdered a cop is “the only thing you need to know about that organization.”

The senator also noted that Cuba has a substantial population of people of African descent.

“A lot of them were in the streets getting their heads cracked open by that régime,” Rubio said.