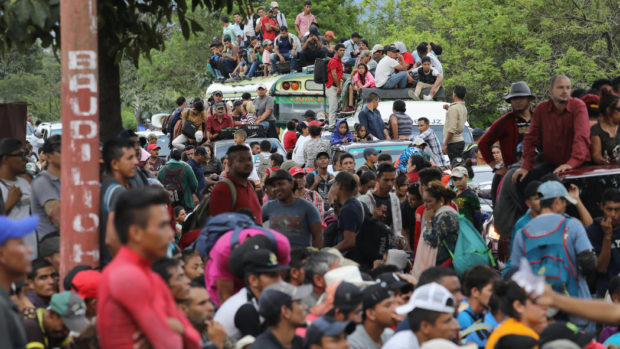 A nongovernmental organization in a small Texas town is working to keep up with large numbers of migrants in need of their support ahead of Title 42’s end, and is hoping they can sustain their efforts.

The Val Verde Border Humanitarian Coalition has had to exponentially increase its aid supplies and hopes it can continue to sustain what is already a large number of migrants seeking support after the pandemic health policy ends, the group’s director, Tiffany Burrow, told the Daily Caller News Foundation. Title 42, the Trump-era policy used for expedited expulsions of certain migrants during COVID-19, is set to end May 23, and the Department of Homeland Security (DHS) is preparing to accommodate 18,000 migrants each day when the order is lifted.

The organization, based out of Del Rio, Texas, is already seeing numbers similar to when it was helping handle the thousands of Haitian migrants who arrived last September, Burrow told the DCNF.

Rather than having to obtain “cases “of water and supplies for the migrants, the group is now having to ensure they have “pallets” of supplies to handle the large number of migrants, Burrow said.

The faith-based organization helps facilitate travel for migrants released from Customs and Border Protection (CBP) custody, but doesn’t pay for their transport.

The plan includes 6 pillars to address the migrant flows, including CBP having the capability to hold around 18,000 migrants at a time in custody by May 23, when T42 is set to end.https://t.co/XPtGl3pJge

The number is not as high as the average numbers of migrants encountered in March and April, but it’s still enough to “knock … most field operations for several stations” out of commission, Anfinsen said.

“We are just handling it one day at a time, so some days we are able to be in the field, and other days we aren’t,” he added.

Burrow emphasized the element of danger migrants face during their journeys as a result of the cartels in Mexico and the trauma they carry once they get to her.

“There are more really unfortunate cases that are coming through. As long as cartels are involved I think we are going to continue to see more situations like what we’re seeing right now,” she said.