Camera shows dozens of NFL players gather at midfield to take a knee – but for prayer, not protest 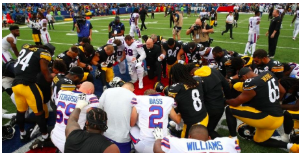 At first glance, it was just one more snippet of the social justice shenanigans that have become a hallmark of the National Football League.

But the photos tweeted by Pittsburgh Steelers chaplain Kent Chevalier show members of the Steelers and Buffalo Bills in a midfield prayer circle.

Chevalier, however, tweeted that there is a lot more than the score that matters.

Prayer is not uncommon in the Pittsburgh locker room, Chevalier told Sports Spectrum.

One unique wrinkle: Sometimes prayer has been held in the showers.

Chevalier said in an interview with Steelers Takeaways that when he speaks to players, he tells them “they are playing for God’s glory, not for the name on the back of their jerseys.”

Deflecting glory back where it belongs. 🙏🏽 pic.twitter.com/jIYgwlqBGY

He said that there are many private moments with players.

“In the Scripture, there is a person, Nicodemus, who was a guy that only would visit Jesus late at night. He didn’t want anyone to know he was talking to Jesus. Well, I love my Nicodemus moments with players. Some guys don’t want to be seen with me. I’ll get late-night texts or calls asking to meet me at night to talk about things by the pool at the hotel,” he said.

That’s where most of my ministry is done – those Nicodemus moments.”

Chevalier added that his role with the team has its limits.

“I’m here to love and serve you. My job is not to push my faith on you, but to be open and communicate with you. I’m here if you are having a hard time no matter your faith. I’m not here to be a Bible thumper. I’m here to be loving to you,” he said.

You can say that you are a Christian all you want,
but your daily habits, actions and consistent interactions
with others will be the
real evidence of a growing relationship with God
and a transformed life.

He also said his job is a dream come true for a Steelers fan.

“I was a Steelers fan my entire life. I could tell you where I was when the Steelers won the Super Bowl in Detroit. As a huge fan of the Steelers growing up in Pittsburgh, this had been incredible. I am truly blessed,” he said.

“I am so happy to be able to do this for the Steelers family, and for Steelers nation. And to be able to help players use their platform to share their faith, I am truly blessed.”