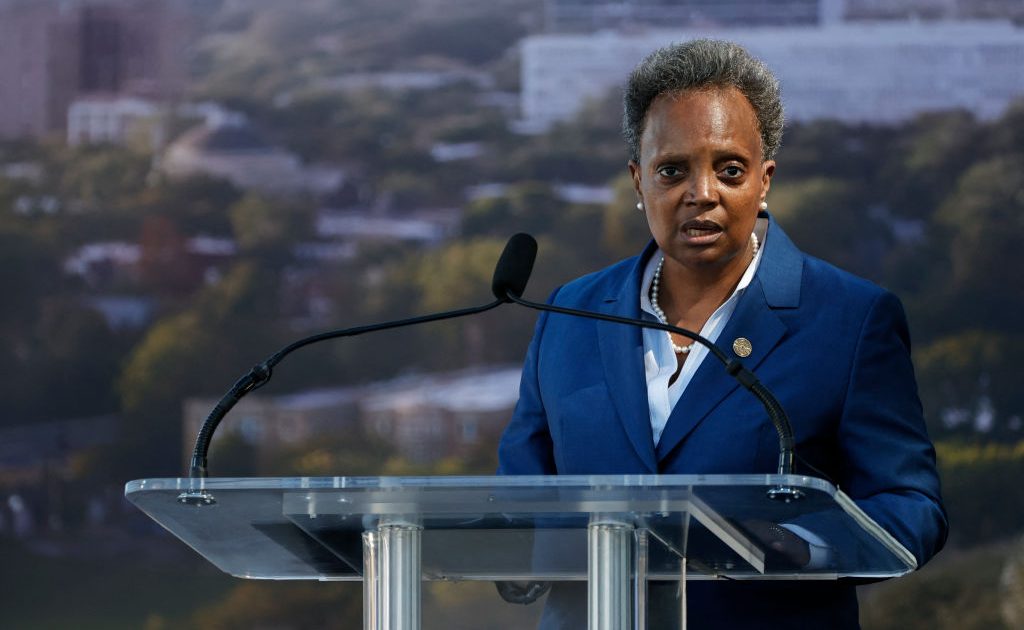 Chicago mayor Lori Lightfoot speaks during the groundbreaking ceremony for the Obama Presidential Center at Jackson Park on September 28, 2021 in Chicago, Illinois.  (Photo by KAMIL KRZACZYNSKI/AFP via Getty Images)

Chicago Mayor Lori Lightfoot criticized her city’s teachers union over its decision to close schools. During an interview Sunday, the Democrat said the Chicago Teachers Union did an illegal walkout while abandoning their posts and their students.

This comes as the teacher’s union proposed an extension for remote learning last week, but Lightfoot denied their request. The union also demanded that schools randomly test at least 10 percent of the student and staff population every week at every school. Additionally, it requested in-person learning be paused for 14 days citywide if positivity rates reach certain specified levels.

However, Lightfoot pointed out that the absolute wrong thing to do is to abandon the science and data that shows in-person learning is best for students.

“They have chose to do unilateral action that is doing nothing but harming children, harming their families, disrupting our system at a time when we need everybody to be unified,” stated the mayor. “We need our kids in school for in person learning.”

Lightfoot said Chicago Public Schools’ decision to cancel class for three straight days last week has had cascading ripple effects not only on students in their learning, social and emotional welfare, but also on the families. She argued parents are outraged while pointing out 70 percent or more of students in the district qualify for free or reduced lunch. This means many children live in households which are poor and working class.

“So we’re drawing a line: enough is enough,” the mayor continued. “I’m tired of the Groundhogs Day appearance of everything that goes on with Chicago Teachers Union leadership. We need partnership, we don’t need conflict right now.”

In the meantime, Lightfoot hopes to come to an agreement at the bargaining table and not in a courtroom.