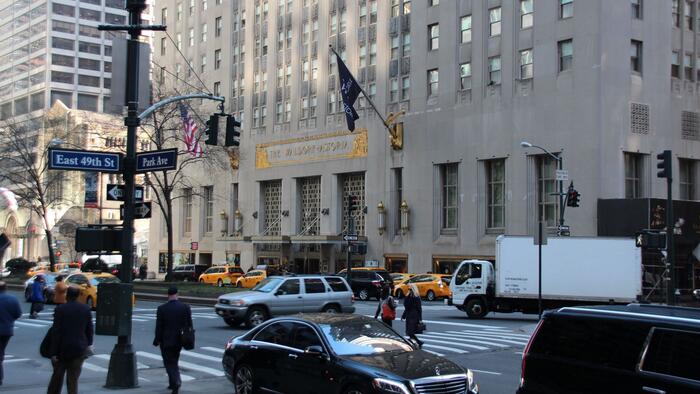 The Waldorf Astoria is one of the most historic hotels in the US. It’s history includes a stretch of ownership by President Donald Trump (long before the start of his political career) and more recently, it became emblematic of the impact of foreign money on American real estate when Chinese insurer Anbang bought the property in one of the most richly valued American commercial real-estate deals in recent memory (the company bought the property for nearly $2 billion back in 2015).

Now, WSJ reports that the Chinese developer’s attempts to turn the property around by converting it into luxury condos has hit a wall, the latest indication that the problems facing Chinese developers aren’t limited solely to the domestic market.

Just last week, the American CEO/frontman for the project abruptly quit, leaving the conversion – which is already two years behind schedule – to flounder.

According to the report, the Chinese company that’s now in control of the Waldorf (having taken over after Anbang’s founder was imprisoned for nearly two decades in China a few years ago during an anti-corruption crackdown/political purge) is aiming to finish the conversion before the end of next year, although they acknowledged that work may continue into 2024.

Costs now are expected to run to more than $2 billion, company insiders told WSJ. That means the total acquisition and conversion costs could potentially exceed $4 billion if cost overruns rear their ugly head.

But even if they don’t, the conversion of the Waldorf is already expected to be one of the largest, most intricate and most expensive condo conversions and hotel rebuilds ever undertaken.

On top of the run-of-the-mill issues pertaining to the supply-chain crunch, high materials costs and general permitting insanity, the conversion of the Waldorf has faced other issues unique to it: demolishing rooms in the century-old hotel has been a difficult process, and the fact that it’s a designated landmark has led to other complications.

As if all these issues weren’t enough, the Chinese state-controlled company running the conversion opened a sales office to market the converted condos just before the pandemic hit and sent the real-estate market in NYC into a tailspin (although real-estate prices have rebounded substantially since).

One luxury real-estate agent told WSJ that no sales have been reported for any of the properties soon-to-be-completed units. On the hotel side, when the property does reopen, it will feature 375 guest rooms and 375 residences. Prices are expected to start at $1.8 million for a studio apartment, before soaring to tens of millions of dollars for a penthouse. Residents will have separate entrances and amenities from hotel guests, including a 25-meter Starlight Pool overlooking Park Avenue.

While a new sales incentive for brokers allowing them to collect their commission once a contract is sign has led to a frenzy of traffic, Donna Olshan, a luxury real-estate agent whose firm publishes a weekly report on the state of the luxury real-estate market in NYC, said the uncertainty in the global economy was likely giving many buyers second thoughts.

“Now we don’t just have Covid, which people have gotten used to, we have war. Inflation. Rising interest rates. And China is all upside down,” Olshan said. “When you put that cocktail together, that can be daunting for a developer.”