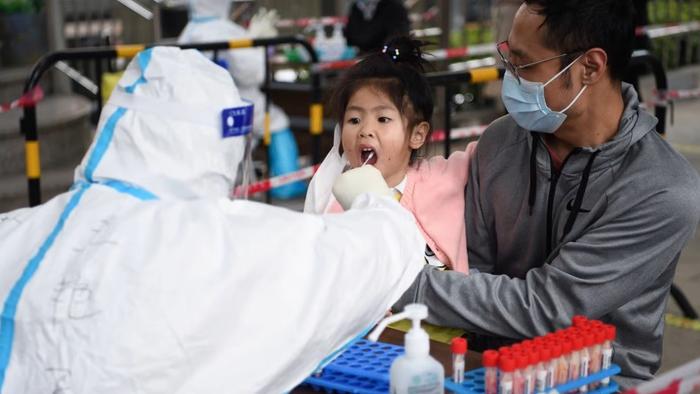 With the provincial capital of Xi’an still locked down more than two weeks after the start of its latest outbreak, the Chinese public has been shocked to see that despite the CCP’s “war-like” approach to combating COVID, the country hasn’t been spared from the latest global wave more than two years after the virus first burst out of Wuhan to infect the world.

Making matters worse, the CCP are imposing new restrictions on the city of Tianjin, which is just a 30-minute drive from Beijing. The Chinese authorities on Monday confirmed 2 omicron cases in Tianjian, but suspect more than 30 more. The source of the cases hasn’t been disclosed, but are already “third generation.”

So far, Tianjin has confirmed a total 31 local cases of COVID and 10 asymptomatic infections, according to Xinhua.

Chinese social media users have already decreed Tianjin as the front line of China’s battle against omicron. As a result, travel into and out of the city has been suspended, with anyone hoping to do so required to obtain a special permit. What’s more, two cases of omicron have been detected in the city of Henan over the weekend. There were 60 reported cases in three cities in the central province.

More than 75K people have been quarantined in Tianjian, and many are already bracing for the kind of harsh lockdown measures already imposed in Tianjin.

Authorities are also preoccupied with an outbreak in Shenzhen, where four locally acquired cases of the delta variant have been found since Friday, when a married couple tested positive during a routine screening.

According to the SCMP, an epidemiological investigation has determined that the origin of the strain discovered in Shenzen, a critical border city in southern China across the way from Hong Kong, isn’t the same as that causing other local cases elsewhere in China. The new cases in Shenzen are the first to be reported in the city, sometimes referred to as China’s Silicon Valley, since May 2020.

Amusingly, as Beijing searches for an explanation for what’s driving the latest outbreak, the SCMP reports that the first person to test positive is believed to have been infected after coming in contact with “contaminated goods” from overseas, echoing China’s excuses that packaging on imported seafood and meat products was responsible for outbreaks – an excuse Beijing regularly abused back in 2020.

As a result, authorities have sealed off apartment buildings where the infected individuals lived, and have imposed compulsory mass testing for Shenzen’s 12.5M residents in accordance with Beijing’s “COVID Zero” playbook. Residents have been asked not to travel, and anybody wishing to do so must have a negative COVID test from the last 48 hours.

Across China, 157 new COVID cases were reported on Monday, including 97 stemming from local infections, per the NHC via the CCP-controlled Global Times. 15 of these cases were from Xi’an, showing that despite the lockdown, the virus has still managed to spread. Keep in mind, the Chinese government has a reputation for dramatically playing down case numbers.

Finally, the outbreak in Shenzen is expected to delay a planned reopening of the border between HK and Shenzen that would allow some limited travel between the two cities.

The big question now: how much will these latest flareups disrupt port operations and chip factory operations. As a reminder, Samsung and Micron have recently warned that the intense lockdown in Xi’an had impacted operations at their local manufacturing facilities in the city, threatening to intensify the global chip shortage.

Meanwhile, the port city of Ningbo is also dealing with a partial lockdown.