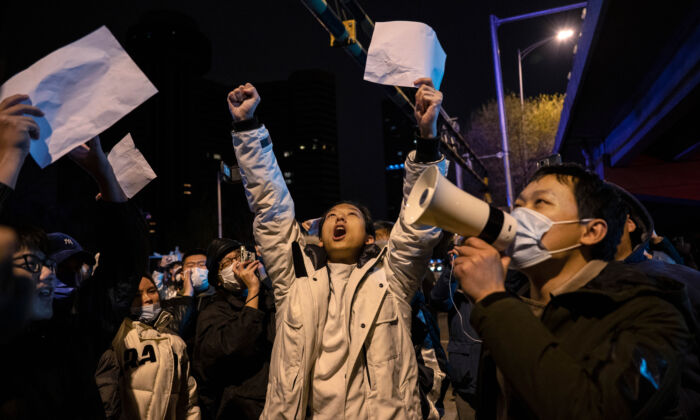 The Chinese regime tightened security in some cities in the aftermath of major protests that flared across the country over the weekend. The protests were a rare show of defiance against Beijing’s draconian zero-COVID policy, which has uprooted daily life for the past three years.

Police on Nov. 28 stopped and searched people at the sites of weekend protests in Shanghai and Beijing, after crowds there and in other Chinese cities took to the streets in the largest public display of opposition to the Chinese Communist Party (CCP) in decades.

The large-scale public disobedience, during which protesters called for CCP leader Xi Jinping to step down, presents a major challenge to Xi, who personally advocated the zero-COVID approach which calls for mass testing, aggressive contact tracing, and prolonged lockdowns.

There was no sign of new protests on Nov. 28 in Beijing or Shanghai, but dozens of police were in the areas where the demonstrations took place.

Police have been asking people for their phones to check if they had virtual private networks (VPNs) and the Telegram app, which had been used by weekend protesters, residents and social media users said. VPNs are illegal for most people in China, while the Telegram app is blocked from China’s internet.

The outpouring of anger was triggered by a deadly blaze last week in Urumqi, the capital city of the far northwest region of Xinjiang, parts of which have been under lockdown for more than three months.

For many other Chinese who’ve endured strict movement curbs during the past three years, the tragedy felt close to home.

“With such restrictions—sealing people’s doors and trapping them in fire—everyone worries that the next [victim] could be themselves. Who is not afraid?” a man living in Beijing told The Epoch Times on Nov. 28. He didn’t want to be identified for fear of retribution.

To mourn the victims, people brought flowers and lit candles, gathering in Shanghai and other cities over the weekend. Candlelight vigils also took place on university campuses across the country, from the central city of Wuhan to Chengdu in the south.

Protests broke out in at least 10 cities during the weekend. In the late hours of Nov. 27, many still gathered at Shanghai’s Wuyuan Road, demanding that the authorities release protesters, a man living nearby told The Epoch Times.

In Shanghai, crowds expanded their demands by calling for an end to the rule of the CCP and Xi, who made it clear during a major political gathering last month that the country would stick to the zero-COVID approach.

Earlier this year, the city of 21 million endured a painful two-month lockdown, which resulted in residents being deprived of access to health care, food, and supplies.

Such large public displays of anger toward the CCP leader, as well as the Party itself, is unprecedented since the mass protests in Beijing’s Tiananmen Square in 1989. When tens of thousands of college students gathered at the heart of China’s capital three decades ago to call for democracy and reform, the CCP sent tanks and troops to crush the young protesters.

Some Chinese hope that the momentum of the movement will carry on.

“I hope there are more demonstrations. A single spark can start a prairie fire,” a Shanghai resident surnamed Ma told The Epoch Times in a phone interview on Nov. 27, referring to a popular slogan that the Chinese regime’s first leader, Mao Zedong, used to use to describe how the CCP’s political movements spread around the country.

As of Nov. 28, China’s state media has remained silent on the weekend’s demonstrations. Senior CCP officials have also stayed quiet.

The nationwide demonstrations came only a month after Xi tightened his grip over the Party and the country during the Party’s 20th Congress. Securing a record-breaking third term, Xi installed his allies, including Li Qiang, former Shanghai Party chief who oversaw the city’s two-month lockdown earlier this year, into the CCP’s top decision-making body.

When asked on Nov. 28 about the widespread unrest, China’s foreign ministry spokesman Zhao Lijian told reporters, “What you mentioned does not reflect what actually happened,” adding that the CCP will preside over a “successful” fight against COVID-19.

On the evening of Nov. 27, hundreds of Beijing residents gathered at Liangma Bridge, holding blank white paper as an expression of protest. Cars passing by honked in a show of support, online video footage shows.

In another gathering in the capital city on that night, residents chanted: “We don’t want restrictions. We want to live!”

In Wuhan, the Chinese city from which the pandemic originated, thousands of residents, mostly shop owners, took to the streets on Nov. 27. People smashed down barriers that officials used to restrict their movements. Unlike the other cities, the trigger for the unrest in Wuhan wasn’t the Xinjiang fire, but the repeated lockdowns that shop owners said hurt their businesses, a woman who runs a fabric shop who witnessed the scenes told The Epoch Times.

Ed Lawrence, a journalist for the BBC, was “arrested and handcuffed while covering the protests in Shanghai,” the network’s spokesperson said in a statement on Nov. 27. The British broadcaster said that it’s “extremely concerned” about the treatment of Lawrence, who was “beaten and kicked” during the arrest.

When asked about the incident at the Nov. 28 briefing, Zhao claimed that the BBC journalist didn’t reveal his identity at the time, though he acknowledged the arrest.

Local officials in several cities eased some restrictions on Nov. 28.

City officials in charge of Beijing’s pandemic prevention said on Nov. 28 that they won’t block doors of apartment buildings and would leave emergency exits clear. They made no mention of the tragedy in Xinjiang igniting last weekend’s protests.

But those living in the capital city said they were still living under harsh restrictions. A Beijing resident surnamed Guo said that local authorities abruptly sealed his residential community in the Haidian district on Nov. 27, even though no new case was reported there.

“How could they suddenly block our doors, without any advance notification? We can’t even get our daily necessities. How could we cooperate with COVID prevention?” the man said angrily in a phone interview with The Epoch Times.

“If [officials] continue, residents will struggle to survive. Then, they definitely will break through.”

Echoing the voices in their homeland, Chinese protesters in Tokyo gathered in the crowded Shinjuku train station holding white paper, calling for the Party and Xi to step down. In London, protesters, mostly in their 20s and 30s, gathered outside the Chinese Embassy in the late hours of Nov. 27. More than 1,000 attended the protest to publicly direct their anger toward the Party leader, participants told The Epoch Times.

Outside observers are now closely watching how Xi, the country’s most powerful leader since Mao, will respond to this tough challenge emerging not long after he secured an unprecedented third term in power.

Observers, however, don’t expect a U-turn of the zero-COVID policy, which the CCP and Xi have cast as an approach superior to the West’s pandemic response.

Concerns were reflected on the global market on Nov. 28, with Chinese stocks and the yuan slumping sharply.

“If Xi decides to continue [with the zero-COVID approach], it would be a gamble on the fate of the CCP and the country,” said Zheng Xuguang, a former student leader during the 1989 protests who now lives in the United States.

“Whether the latest wave of resistance can succeed largely depends on the response of senior military and [CCP] officials,” he said.

“Even if the military maintains a ‘neutral’ position, it would be a positive signal [to the protesters]. Without the army’s intervention, the police force alone, including riot police, is not able to quell the civilian mutiny.”

Luo Ya, Hong Ning, and Reuters contributed to this report.