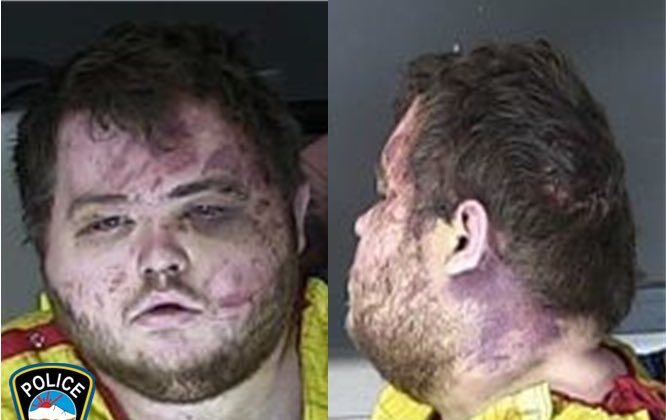 A mugshot of suspect Anderson Lee Aldrich, the suspect in the shooting at Club Q in Colorado published by police on Nov. 23, 2022 (Colorado Springs Police Department)
Crime and Incidents
By Katabella Roberts

The suspect accused of shooting five people at a gay nightclub in Colorado has appeared in court this week, displaying multiple bruises to his face.

Anderson Lee Aldrich, 22, faces five counts of first-degree murder and five charges of committing a bias-motivated crime causing bodily injury after he opened fire on dozens of people at the Club Q nightclub, leaving 17 others with gunshot wounds.

In a statement on Monday, the Colorado Springs Police Department had said that a photograph of Aldrich was not available because he remained in custody at a local hospital as he was also injured in the shooting.

On Wednesday, officials released a mugshot of the suspect just a few hours after he appeared before 4th Judicial District Court Judge Charlotte Anken via a virtual appearance from his jail in El Paso County.

The pictures show Aldrich wearing a bright yellow vest as he looks first into the camera and then to the side. The suspect’s face and neck can be seen covered in what appears to be bright purple and black bruises, while his left eye looks swollen.

The thick purple bruise appears to run down past the suspect’s ear and onto his neck.

A screenshot taken from his court appearance shows Aldrich slumped over in a wheelchair and looking dazed.

It is unclear how the suspect sustained the injuries to his face and neck; however, police on Monday revealed that he had been taken down by two heroic bystanders during the shooting at the Club Q nightclub.

In a statement, officials named the two individuals as Thomas James and Richard Fierro, a decorated Army veteran.

“Their exact actions are part of the investigation, so we can’t discuss the specifics out of respect for the judicial process, but with their permission, we want to acknowledge their heroic actions,” police said.

Fierro told The New York Times that he had been at the club with his wife, daughter, and friends on Saturday when gunfire broke out, prompting him to draw on his military experience and attempt to tackle the gunman to the ground. The 45-year-old, who served as an Army officer in Iraq and Afghanistan, said he then beat the suspect using his own gun before another club patron stepped in and helped.

“I don’t know exactly what I did, I just went into combat mode,” Fierro said. “I just know I have to kill this guy before he kills us. I grabbed the gun out of his hand and just started hitting him in the head, over and over.”

Aldrich was ordered held without bail by judge Anken on Wednesday. He is scheduled to appear in court again on Dec. 6, although this may be changed due to a scheduling conflict with defense attorneys, ABC News reports.

The suspect’s court appearance comes shortly after his lawyers said he identified as “nonbinary” and uses “they/them” pronouns and will be addressed as “Mx. Aldrich” in court filings.

The title “Mx” is often used by people who are transgender to avoid specifying their gender.

Police on Monday also identified the victims of the shooting attack as Kelly Loving, 40; Daniel Aston, 28; Derrick Rump, Ashley Paugh, 35; and Raymond Green Vance, 22, who was the boyfriend of Fierro’s daughter.