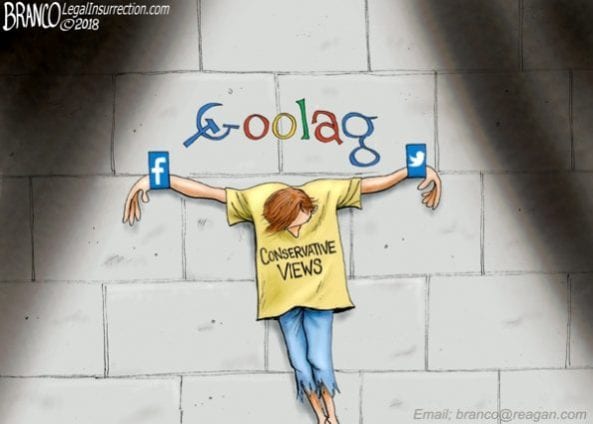 Google has proven this in the way they shaped traffic to this post moments after it was posted.

When we posted this, we saw more than 150 pageviews per minute – that indicated a viral post. Apparently Google also noticed that and quickly killed the post – 15 per minute.

The post didn’t change, didn’t suddenly have different information so why the loss of viewers?

Google Search is Biased Against Conservatives

Sherry in Virginia told us, “It’s frustrating to search for a basic news story and only get CNN, MSNBC and other biased links. I want the whole truth from both sides so I can decide for myself.”

She’s not alone. Most Americans don’t want their search engine force-feeding them biased results. They would rather see information from varied sources and then make their own determinations.

Growing up, I was taught by my Grandfather to read at least two news sources daily. He always read his local paper, which was left-leaning, and the Wall Street Journal, which was right-leaning. By reading both perspectives, he could draw his own conclusions about the truth.

I don’t watch TV news… ever. It’s sound bites and editorial. Not important. I read my news. I have subscriptions to the WSJ, IBD, and other worthwhile agencies while also reading the stuff NBC, CNN, Fox News and others put out. I like perspective. Otherwise, you end up in the echo chamber of social media or trapped by the entertainment news on TV.

So, how can conservatives escape Google’s search bias?

All of the major internet browsers give you the option to change your search provider. I like DuckDuckGo because they aren’t biased and don’t track your searches.

Changing your search provider is typically only two or three clicks and requires no downloads or anything else.

In Chrome, go to the settings menu:

Then choose ANYTHING other than Google.

The operation is similar in Firefox (which I use), Microsoft Edge (which is terrible) and Safari. Do your own research to find a search engine that isn’t feeding you leftist crap and tracking you like you’re a lost dog.

I like DuckDuckGo and no, I don’t have a business relationship with them in any way. I just like my search results to be free of bias and I don’t like being tracked.