“Dangerous Escalation”: US To Deploy Six Nuclear-Capable B-52 Bombers To Australia 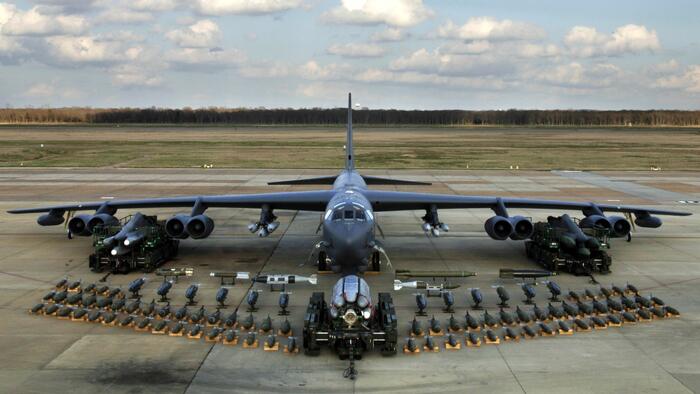 America’s great power competition against China is gaining momentum as the Pentagon plans to deploy a fleet of nuclear-capable B-52 bombers in northern Australia in what is being dubbed a “signal” to Beijing, the Australian Broadcasting Corp. reported.

“Having bombers that could range and potentially attack mainland China could be very important in sending a signal to China that any of its actions over Taiwan could also expand further,” Centre for New American Security’s Becca Wasser told the ABC.

The Australian broadcaster’s current affairs show, Four Corners, revealed the US documents detailing up to six nuclear-capable B-52 bombers were set for deployment at the Tindal air base, south of Darwin in Australia’s Northern Territory. The airbase would also receive $100 million in upgrades for the maintenance and parking areas for the bombers, expected to be finished by 2026.

“The ability to deploy US Air Force bombers to Australia sends a strong message to adversaries about our ability to project lethal air power,” the US Air Force told Four Corners.

“This is a dangerous escalation. It makes Australia an even bigger part of the global nuclear weapons threat to humanity’s very existence — and by rising military tensions it further destabilises our region.”

This is a dangerous escalation. It makes Australia an even bigger part of the global nuclear weapons threat to humanity’s very existence – and by rising military tensions it further destabilises our region https://t.co/OTSSfV25fJ

The long-range heavy bombers send a clear “signal to the Chinese” that the Americans and its allies are “planning for a war with China,” Richard Tanter, a senior research associate at the Nautilus Institute and anti-nuclear activist, explained to Four Corners.

A recent op-ed in the Australian Financial Review titled “Australia’s alliances in Asia are a tale of two regions” points out that the Biden administration’s chip restrictions on China to crush its technological capabilities “is unambiguously a new cold war.” He said Australia has a complicated juggling act of catering to its top trading partner China and its top security partner, the US, while Washington pressures Canberra and other countries in the region to distance themselves from Beijing.

Besides the bombers, Australia, the UK, and the US recently announced a new security deal known as AUKUS, allowing the Australian military to procure a fleet of nuclear submarines by 2040.

Chinese Foreign Ministry spokesman Zhao Lijian responded to the news Monday and wasn’t all too thrilled:

“The US’s move escalates regional tensions, gravely undermines regional peace and stability, and may trigger an arms race in the region.”

The US military’s expanding footprint in northern Australia shows Washington’s quest to build a ‘friends circle’ of bombers and stealth fighter jets around China.