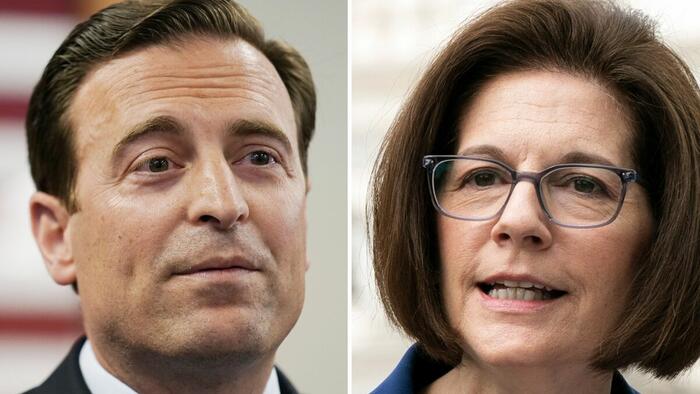 For Republicans to take control of the U.S. Senate, they’ll need to flip at least one seat currently held by Democrats. That’s looking increasingly likely, as the Republican challenger in Nevada is pulling ahead of the incumbent Democrat in the latest polls.

The race pits one-term incumbent Democrat Catherine Cortez Masto against Republican Adam Laxalt; both are former Nevada attorneys general. According to a Rasmussen poll released on Friday, Laxalt leads Cortez Masto 48% to 43%. Unaffiliated voters back the Republican by an 18-point margin — 48% to 30%.

A CBS News/YouGov poll published on Thursday put Laxalt up 1%, and found Cortez Masto is backed by 57% of women while Laxalt is the choice of 56% of men.

Latino support of the Democratic Party is fading across the nation, and Nevada is no exception: While Cortez Masto won the Latino vote by 29 points in 2016, she’s only up 18 this year, according to CBS News/YouGov.

Sticking to the Republicans’ 2022 playbook, the Laxalt campaign has centered on the economy, inflation, crime and immigration. In Nevada as elsewhere, those are the top issues of concern to voters. When asked which is the best party to address them, more voters say Republicans are.

Pocketbook issues carry more weight in Nevada, a state with a higher proportion of working-class voters — many of whom were laid off in the wake of pandemic shutdowns favored by Democrats. Today, Nevada gas prices are among the highest of any state, averaging $5.11 a gallon, which is nearly 34% above the nationwide average.

In the wake of the Supreme Court’s overturning of Roe v Wade, Democrats hoped the abortion issue would give Cortez Masto the edge she needed as one of their most vulnerable Senate incumbents. The problem is abortion is far from being a top concern of voters.

Veteran Democratic strategist James Carville — who coined the expression “it’s the economy, stupid” during the 1992 Clinton presidential campaign — takes a dim view of the party’s emphasis on the issue.

“A lot of these consultants think if all we do is run abortion spots that will win for us. I don’t think so,” he told Associated Press. “It’s a good issue. But if you just sit there and they’re pummeling you on crime and pummeling you on the cost of living, you’ve got to be more aggressive than just yelling abortion every other word.”

Laxalt has taken a light-handed approach to the abortion issue, calling legal abortion “settled law” in Nevada, while supporting a state referendum to impose restrictions after 13 weeks instead of the current 24 weeks. About 70% of Nevadans say abortion should be “mostly legal.”

Yusette Solomon, who canvasses for Nevada’s pro-Democrat Culinary Workers union, tells AP that voters he interacts with don’t talk much about abortion. Rather, it’s tough economic conditions: “It’s hard for everybody. It’s the supermarket. It’s gas. Inflation is something we need to deal with. Everyone’s feeling it.”