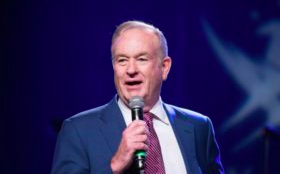 The former Fox News star announced Monday that he was teaming up with the 45th president for a nationwide in-person interview tour starting in Florida on December 11.

Tickets for the first stop of “The History Tour: President Donald J Trump with Bill O’Reilly” will go on sale Thursday.

Stops include Sunrise, Florida, and Houston and Dallas, Texas.

“After Biden’s inauguration, the idea rummaged around in my head two months,” O’Reilly told The New York Post. “I flew to Mar-a-Lago April 4. I know the man 30 years.”

“He asked how we do this. I said, ‘No pandering. No politics. It’s your handling of China, Putin, the economy, ISIS, getting the vaccine. I’ve done the research. The key is it’s all history and people don’t even know how or what. I’ll ask the questions. We’ll record it. Two hours 15 minutes. Hockey and basketball arenas that seat 18,000. My own production company books it.”

“What’ll it accomplish? It’s to know what actually happened. Frustrated millions never got actual reports from anyone. They only heard haters. It’s what he did and why — and what he didn’t do,” he said, and promised “hard-hitting” questions that will set the record straight.

Sponsored: The 3 foods that GROW cancer

“Look, he wants to make history? It’s this. No president besides Lincoln experienced this much hate. It’s not being flamboyant. It’s ‘tell the people what you did and why.’ Tell us your four years. Get your version on record. Show us how it works. Anyone who loves their country champions free speech,” O’Reilly continued.

“So not to badger him, I put it in writing. A 45-minute Q-&-A oral history. Then intermission. People can have a cocktail. Some may even need it. The Q&A will be on cards from the audience.”

“Interested in the concept, he trusted me,” he said. “He’s a businessman. He saw it right away.”

“These will be wonderful but hard-hitting sessions where we’ll talk about the real problems happening in the U.S., those that the fake news media never mention,” Trump told The Washington Examiner. “I will be focusing on greatness for our Country, something seldom discussed in political dialogue.

Sponsored: The one food you should NEVER put on your dinner plate

Both promised a good time for attendees.

“If we don’t make our country great again, we will soon no longer have a country!” the former president said. “It will be fun, fun, fun, for everyone who attends!”

“My job as a historian/journalist is to get important things on the record in a fact-based way,” O’Reilly said. “These conversations with the 45th President will not be boring.”