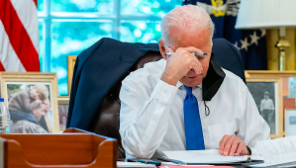 If your child needed an appendectomy, would you let President Joe Biden do the surgery?

The answer, unless you’re depraved or some tragedy has rendered you incapable of rational thought, is obvious: “No.” Why? Because they’re not qualified.

The human body is a complex organism that consists of hundreds of equally complex systems. Performing surgery – even a relatively simple procedure such as an appendectomy – requires extensive education, very specific skills and expertise. If we allow anyone without that training and experience to perform surgery, the patient will likely die.

Let me point out something else that should be obvious: The United States’ economy is even more complex than a single human body. It is the largest economy in the world, with a gross domestic product of more than $22 trillion. There are more than 30 million firms in this country, ranging in size from a single owner to 2.2 million employees. As of 2019, the U.S. economy employed more than 157 million people across hundreds of industries. It meets the needs and supports the day-to-day lives of not only the 333 million people who live in this country but literally billions of others across the globe who use our products and services.

Our economy has also created more prosperity for more people than any other in history. I mention this because the current administration is going to destroy it unless we stop them.

Earlier this week, White House press secretary Jen Psaki said, “The president wants to make fundamental change in our economy, and he feels coming out of the pandemic is exactly the time to do that.”

Nothing in the president’s job description – and by that, I mean Article II of the United States Constitution – gives him the power or the right to “fundamentally change” the U.S. economy. I would go further and venture that most of the people who actually voted for Biden do not want the “fundamental change” he and his puppet masters are contemplating.

This demonstrably mentally feeble human being is utterly unqualified to make monumental decisions about the direction of the U.S. economy. But that is perhaps unfair to Biden since none of the others slavering to remake it in their image are qualified either. They’ve never launched a company, created a product or service that the public is willing (as opposed to taxed) to pay for, grown a venture around it and made payroll every week. But even if they had done so, that would not qualify them to run or much less “fundamentally change” the U.S. economy.

We are already suffering the consequences from some of these people’s idiotic decisions. On the very first day of his administration, Biden issued an executive order shutting down the Keystone XL oil pipeline and ending the energy independence the U.S. had achieved under former President Donald Trump. Gas prices have skyrocketed in the months since, rising 65% (or an average of $1.10 a gallon) since this time last year. That drives the price of everything else higher. According to Mark Zandi, chief economist at Moody’s Analytics, every penny increase at the pump costs Americans $1 billion. A $1 increase costs us $100 billion.

The COVID-19 lockdowns, as near as can be calculated, resulted in the permanent closure of 200,000 businesses in 2020. We have a supply-chain crisis threatening to worsen with each passing day. Closures of our busiest ports, in Los Angeles and Long Beach, California, contributed to backlogs. The ports are open now, but as of last month, there were 157 ships floating off the coast of California waiting to unload, and more arriving daily. Transport bottlenecks have been exacerbated by the government’s decision to extend unemployment compensation, essentially paying people not to work. There are, at present, nearly 11 million unfilled job openings in the U.S. – a record. Companies that did not go under during the COVID-19 lockdowns are struggling to recover; without enough employees, they will not be able to.

In the middle of this crisis, Biden issues more idiotic (and arguably unconstitutional) edicts such as forcing companies to require their employees to take COVID vaccines, even those who have already contracted the virus and recovered. New York has lost 3% of its health care workers to firings, layoffs or resignations over this mandate: 25,000 professionals. These are the same people who saved lives in high-risk situations before vaccines were available.

It isn’t just health care workers affected. Dozens of Massachusetts state troopers have submitted resignation paperwork. Los Angeles County Sheriff Alex Villanueva is refusing to enforce the mandate, fearing the loss of “5 to 10%” of his police force. Last weekend, Southwest Airlines pilots and air traffic controllers in the southeastern U.S. allegedly engaged in a “sick-out” protest, resulting in the delays and cancellations of thousands of flights.

It isn’t that competent government (assuming we had one) should anticipate all these contingencies and plan for them. To the contrary, it’s that no one person or group of people can possibly be expected to.

History shows this over and over again. Despite the best (worst) efforts of collectivist academics and the authoritarian regimes that implement their theories, top-down planning can neither create nor preserve widespread economic wealth or prosperity. We have seen this in the former Soviet Union, in North Korea, in Cuba, in Cambodia, across Africa and (most recently) in Venezuela. All human beings make mistakes. When it’s a corporate board, the company may fail, but consumers have other options. When it’s the central planners, the entire system fails, and citizens face nationwide shortages, rolling blackouts and widespread privation.

America’s phenomenal economic success is attributable to the fact it is not centrally planned or controlled. The present administration harbors a cadre of self-appointed social engineering geniuses who think they can “fundamentally change” things to suit their liking. If we let them pursue their aims, they will destroy the American economy, and the country with it.